Addison and Haley expected to be named in Ireland squad 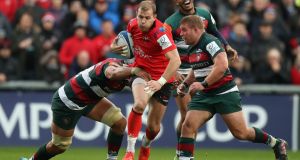 Will Addison of Ulster charges upfield during the Champions Cup match between Ulster and Leicester Tigers, October 13th, 2018 in Belfast. Photograph: David Rogers/Getty

In the likelihood that Johnny Sexton and most or all of the other front-liners will be excused duty from next week’s meeting with Italy in Chicago in readiness for the ensuing back-to-back games against Argentina and New Zealand at the Aviva Stadium, Joe Schmidt is set to name an enlarged squad at lunchtime on Wednesday for the forthcoming, four-match November Test window.

Schmidt has used 75 players and given Test debuts to 34 players since the last World Cup, but at the three-quarter stage of this latest cycle this window offers more scope to further expose lightly capped players than introduce more debutants.

That said, it could be that up to three uncapped players will named in a squad of about 37 or 38 players, namely Ross Byrne, who toured Australia and was an unused replacement in the third Test, along with the recently acquired duo of Ulster utility back Will Addison and Munster full-back Mike Haley. If they are to be contenders for next year’s World Cup, it makes little sense to leave them out.

Addison is a relatively experienced 26-year-old who trained with the Ireland squad in the week of the Melbourne test and again when a squad of almost 50 players convened in Carton House in August. His running game has caught the eye at Ulster and his ability to also play on the wing and at full-back (he even slotted in at out-half briefly in the win over Leicester) is also decidedly useful.

Similarly, the 24-year-old Haley has overcome injury to start five games at full-back for Munster.

Two Novembers ago, Schmidt named a 34-man squad for the original Chicago fixture against the All Blacks, with six players subsequently added to the squad for the Canada game.

This time around, it would be no surprise if most or all of a notional starting XV were rested from the excursion to Chicago, with Ireland then locked and fully loaded for the Guinness Series meetings with Argentina and New Zealand – both also match-hardened from the Rugby Championship. Hence, many front-liners could be available to their provinces this weekend.

As with the Italian game, the finale against the USA also offers an opportunity to afford less experienced players more game time in the test arena. By contrast, such scope is restricted in the Six Nations, when Ireland will have a title to defend.

Conor Murray is due to meet the media on Wednesday evening and may perhaps give an indication as to when he hopes to return to action. Not having played since the third test in Sydney, it seems highly unlikely that he would bridge a four-month gap by starting against Argentina or the All Blacks. Johann van Graan on Tuesday admitted he would be surprised if Murray were named.

Ireland’s dependency on Murray is arguably even greater than on Sexton, and hence in some respects this may be no bad thing. In addition to Kieran Marmion and John Cooney therefore, who both toured Australia, Luke McGrath ought to be restored.

Joey Carbery’s decision to relocate to Munster has already been vindicated. He has started six games in a row for his new province (another indicator he is likely to start against Italy after being rested this weekend) having done so just once for Leinster last season and three times in total.

By contrast, Byrne has been confined to just two starts for Leinster, after 19 last season, but he is the de facto third choice number “10” as things stand, with the much improved Jack Carty and Billy Burns likely to miss out.

With the in-form Dan Goggin having joined Chris Farrell on Munster’s lengthy injury list, Addison has possibly jumped ahead of Stuart McCloskey, Rory Scannell and Sam Arnold in the pecking order to join the established trio of Bundee Aki, Robbie Henshaw and Garry Ringrose.

There is room for one or two more outside backs to join the five who toured Australia, especially if Jacob Stockale and Rob Kearney are not brought to Chicago. Aside from Haley, the early season form of his Munster teammate Darren Sweetnam makes him a contender.

Rory Best’s return from injury should see him join the three who went to Australia, presuming Rob Herring and Niall Scannell are fit, while there is also room for the in-form Dave Kilcoyne and Finlay Bealham to force their way in.

The five locks taken to Australia may be retained en bloc, with James Ryan and Iain Henderson kept back for the Pumas and All Blacks. However, it is, as ever, the back-row where the competition for places and the attrition rate may ensure six or seven being included, all the more so with Sean O’Brien, Josh van der Flier and Rhys Ruddock having returned to fitness and form.