Stuart Lancaster says Leinster got ‘a good lesson’ from Toulouse 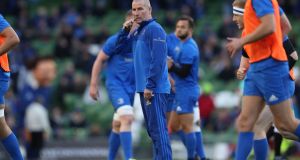 For once Leinster appeared periodically ill at ease in Toulouse, light years removed from the “comfortable in chaos” ethos that Stuart Lancaster has advocated and worked hard to construct since arriving at the Irish province.

Starting poorly, submerged under a sea of errors, Leinster fought back to take a 27-21 lead, before succumbing once again to mistakes from which they couldn’t rescue the result. As a performance it was at odds with the pre-match gameplan. Leinster didn’t underestimate Toulouse, they simply didn’t execute with their customary clarity and precision.

Toulouse deserve massive credit for the pressure they exerted and the manner in which they exploited the opportunities that came their way, but in Tuesday’s review Leinster’s primary focus was on the shortcomings of their performance.

Lancaster, when asked whether the team looked distinctly uncomfortable in chaos at the Stade Ernest-Wallon, admitted: “I think that’s fair. I think the key things we talked about were the first 20 and the last 20.

“They played well, no doubt they were one of the best teams we played against in terms of the uniqueness of how they played; they did the homework and key ball players played very well. But it was disappointing to give them that 14-point start. It’s taught us a good lesson.”

He pointed to the fact that, unlike the Clermont match, Leinster will have a chance to atone for the setback when the tournament resumes in December, and that most teams that qualified for the knockout stage of the competition last season won four from six matches, and in the case of Saracens, three with a draw.

Lancaster continued: “There’s still 20 points to play for and we’re on six, but we have to learn the lesson because with the atmosphere and intensity of the crowd, it definitely affected some of our decision-making under pressure and we need to be better at that.

“The reality was the first 20 minutes and the last 20 minutes weren’t good enough to win against a team that were playing very, very well. And as experienced a team as we have, there’s also a lot of players who haven’t been in that environment before.

“So you might look at the Leinster team and go, ‘Oh jeez, they’ve all been in it’, but James Ryan, other than maybe that Ireland-France game, and Jordan Larmour probably [have] never been in that sort of environment. It’s just different. I think we needed to have been . . . I could have prepared them better for that.

“The intercept was such a huge moment in the game psychologically. If we had have executed the play, there was a massive hole. Even then we’ve still got 10 minutes. I don’t think it was complacency or anything like that, it was a lesson learned. And it was a good one for us.”

Leinster missed too many tackles and this combined with the gorgeous footwork, agility and offloading ability of several Toulouse players proved a calamitous handicap. This was another point of reference in the Tuesday review amongst the Leinster players.

Lancaster explained: “When the [Toulouse] players are deep, we’ve got to not allow them the time to use their feet and we gave them too much time on the ball, in my opinion. That’s the thing we talked about this morning.”

Dan Leavy is set to return to full training with a view to being available for Leinster’s Guinness Pro14 game against Benetton at the Stadio Comunale di Monigo on Saturday (3pm Irish time).

The flanker has recovered from a calf strain that he sustained in the warm-up ahead of the province’s opening Heineken Champions Cup match against Wasps at the RDS a fortnight ago. He was withdrawn just before kickoff and was absent for the defeat in Toulouse.

Rob Kearney (quad), who also missed the game in France, returned to training last Friday and is available for selection this weekend. Josh van der Flier was withdrawn with a head injury during the match on Sunday. He has entered the graduated return to play protocols and will be assessed by the Leinster medical team during the week.

Unfortunately Fergus McFadden sustained a high-grade hamstring injury in training. The early prognosis is that it may be similar to the one he suffered against the Scarlets in the Champions Cup semi-final last season, and he will see a specialist on Friday. Dave Kearney is currently rehabilitating an adductor strain.