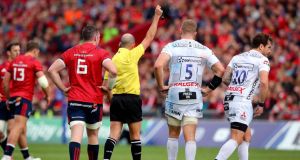 Munster’s victory may feel a little hollow, the nature of the performance so pockmarked by error that any satisfaction of the four-try bonus point win will feel a little muted. Losing the unfortunate Tommy O’Donnell and Dan Goggin to injury further compounded an afternoon when the home side struggled to maintain any rhythm.

It should have been a great deal more straightforward following the sending off of Gloucester outhalf Danny Cipriani but it was the English club who deserve huge kudos for the manner in which they scored three of the last four tries in the match. That took and showed character but Munster were complicit in switching off while their discipline – they finished the game with 13 players – was incredibly lax in the final quarter.

The performance of French referee Alexandre Ruiz will come in for scrutiny and whatever viewpoint is taken, both teams might agree that he and his officials were inconsistent when it came to doling out cards.

Munster will take the win and move on. Tadhg Beirne and Jean Kleyn were superb, Peter O’Mahony, James Cronin and CJ Stander also hard working and for the most part diligent; Joey Carbery got his team moving in fits and starts, while the bench, particularly Alby Mathewson, injected some zip and dynamism into the home side. Mike Haley was a bright presence at fullback and until his replacement, Rory Scannell was superb in straightening the backline and offering positive gainlines.

The first half narrative was dominated by two cards, one red, one yellow, both brandished by French referee Ruiz to Gloucester players. Tom Savage got 10 minutes in the bin for catching Munster centre Goggin with a flailing arm in trying to clear him out at a ruck.

No sooner had he returned than Cipriani was sent off for striking Rory Scannell with a shoulder to the head in attempting to make a tackle. Without seeking to ascribe intent it appeared clumsy rather than malicious but in applying the letter of the law, the French official was correct.

Players crave consistency and if that was borne out then two more Gloucester players were fortunate not to take a mid-match sabbatical.

A high hit on Beirne was marginal in terms of whether a double whammy of penalty and card was merited but there should have been no ambiguity in the officials’ decision-making process when Gloucester centre Billy Twelvetrees clobbered Carbery, high, with his shoulder. If Cipriani’s was red, based on the contact point, then Twelvetrees’s tackle merited the same censure.

It distracted from what had been a largely poor half from a Munster perspective, losing four of eight lineouts, sloppy in possession, error-prone and looking remarkably disjointed, miles removed from recent performances.

Even fullback Haley’s try on 20 minutes didn’t have a settling effect as Munster continued to fritter away possession and couldn’t go two or three phases without an error. Gloucester weren’t much better but when Cipriani kicked a penalty after 23 minutes they trailed just 5-3. The Gloucester outhalf, ignored by England coach Eddie Jones during the week when announcing a squad for the November Test series, was gone within five minutes.

Gradually Munster managed to get some traction in the game and Gloucester were lucky not to be more depleted as their tackling rose above the acceptable. Carbery kicked a penalty and tagged on a conversion when Munster’s lineout maul motored over the line from 15 metres, hooker Rhys Marshall acting as tail gunner to touch down.

The loss of the unfortunate Tommy O’Donnell to an ankle injury, removed on a stretcher, was a further blow in a half that didn’t contain too many positives.

The home side wanted to press home their advantage as quickly as possible in the second and they were largely successful in this undertaking, accumulating the four-try bonus by the 55th minute as Carbery and replacement centre Sam Arnold touched down for tries, both of which the Munster outhalf and man-of-the-match converted.

At 29-3 Munster should have been cruising but a raft of replacements, poor discipline and some tremendous character displayed by Gloucester saw the English club score three of the last four tries in the game through fullback Jason Woodward, replacement and former Munster player Gerbrandt Grobler and their outstanding captain, Ben Morgan.

Andrew Conway’s try was a mini oasis for the home side in a barren spell and an injury to Goggin in the final play of the match represented another sliver of misfortune.

During the Gloucester renaissance, Ruiz awarded the English club eight penalties in succession and it was only from the last when he adjudged that Arnold had batted the ball down in the shadow of his posts that he reached for his pocket and brandished a yellow card.

Having found it, he needed it again two minutes later when Archer was guilty of a head-high tackle; the French official chose yellow once again.

Munster coach Johann van Graan will be disappointed with several aspects of the game, conceding 16 penalties and three tries to a side that played 52 minutes a man down following Cipriani’s sending off. The scrum was excellent for the most part but the lineout, where Munster lost seven of 11 throws, won’t please players or coaching staff.

Munster took the five match points and looking forward to December when the tournament resumes that overrides everything else. But in the shorter term the performance review on Monday will be coruscating based on the performance.