British racing will resume on Wednesday after equine flu scare 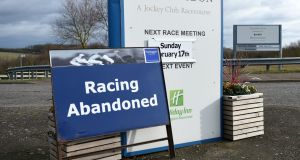 British racing will resume on Wednesday after confirmation late on Monday night from the British Horse Racing Authority that a “risk managed return” can take place.

The BHA ordered a shut down on racing last week after an outbreak of equine influenza at the stables of trainer Donald McCain.

On Sunday four new positive tests for equine flu were discovered at the Newmarket yard of Simon Crisford to add to the six cases at McCain’s yard.

Criticism has grown in recent days of the BHA decision to cancel racing as a result of vaccinated horses testing positive for flu.

However on Wednesday night an industry veterinary committee gave the sport a green light to return, albeit in controlled, risk managed manner.

“Our approach since hearing about the first positive results last Wednesday has been based on accumulating as much information as we could as quickly as possible so we could properly understand the risks of this virulent strain of flu spreading to more horses. That would be harmful to them and damaging to any trainers’ yards that became infected,” Dunshea said.

“It has also been our intention to ensure that we avoid an issue that could result in a long-term disruption to racing with the risk of many of our major events being unduly impacted.

“After analysis of thousands of samples, and no further positive tests on Monday, we still only have two confirmed sites of infection. We have put robust containment measures in place around both.

“From the testing and analysis conducted the disease appears to be contained at present. The BHA veterinary committee believe that the swift controls on movement that were put in place have clearly helped to restrict the spread of this virus.

“There have been significant logistical issues associated with testing and processing so many tests in such a short space of time. Fortunately, owing to the tireless efforts of the Animal Health Trust, trainers and their local vets, and BHA staff, the vast majority of yards which had been placed on hold will be in a position to resume racing.

“Clearly, there is some risk associated with returning to racing. This risk has been assessed and, based on the evidence – and ensuring biosecurity measures are in place – the level of risk is viewed as acceptable,” he added.

Racing will resume on Wednesday with four meetings. There will be two jump fixtures at Musselburgh and Plumpton as well as two all-weather flat fixtures at Southwell and Kempton.

However, the BHA also said a risk framework is being put in place which allows it to categorise individual trainers by the level of risk they have been exposed to. The ability of runners to return to racing from those yards will depend on the risk categories the yards are placed in.

British racing’s ruling body will contact trainers in the morning to inform them of their category and eligibility to run.

As part of the biosecurity measures, no entries or declarations will be accepted from horses that have not been vaccinated in the previous six months. In addition, all trainers will be required to provide a health declaration upon arrival at a racecourse.

“We will observe closely those horses who are taken to the racecourse and will intervene as a precaution to prevent a horse running or accessing a racecourse if we believe it might put other horses at risk of infection.

“The veterinary committee are of the view that an unprecedented amount of this disease has been identified in Europe. This is not a typical endemic period and it was essential that precautions be taken to protect the horse population.”

It was also decided on Monday night to reschedule some key races which had been cancelled at the weekend. They include the Betfair Hurdle which will be run at Ascot on Saturday on a programme which will also feature the Denman Chase.