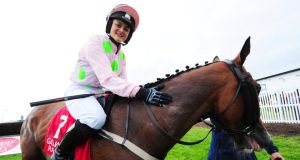 Katie O’Farrell with Low Sun after their victory at Galway on Saturday. Photograph: PA

Willie Mullins won his fifth feature race of the Galway Festival as Low Sun found plenty for pressure to give Katie O’Farrell another famous victory in the Galway Shopping Centre Handicap Hurdle.

The pair had teamed up to win a big pot at the Irish Grand National meeting at Fairyhouse and gone close in two competitive races at the Punchestown Festival.

Following a short break, Low Sun returned to action with a win on the Flat at the Curragh and was always travelling well here, but appeared to have been caught flat-footed by Minella Awards.

Davy Russell had been patient on Harry Fry’s charge who looked sure to provide the Brits with a first winner of the week, but Low Sun (7-1) battled back gamely to win going away at the line.

In what was quite a rough race, Mullins’ Uradel, winner of Monday’s feature on the Flat, was brought down by Cook Islands but all fallers and jockeys reportedly returned unscathed.

Mullins was also responsible for the third, Shanning and fourth Lareena.

“Low Sun was probably on our ‘to sell’ list in the spring time, but has come out now and won in Fairyhouse and here and I still think he has a career on the Flat, so he could possibly go for some of those staying handicaps later in the summer or early autumn,” said Mullins.

“He is turning out to be a stayer. Today I thought he was beaten, but Katie got a second wind out of him and he stayed on really well.

“Shanning ran well for her third run over hurdles and if I can keep her sound, she’s a mare that will win a handicap or two and I think she’s a really nice mare.”