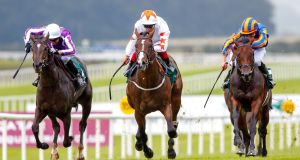 Advertise (centre) ridden by Frankie Dettori on the way to winning the Keeneland Phoenix Stakes at the Curragh. Photograph: Bryan Keane/Inpho

Alpha Centauri continued her fantastic campaign with an impressive victory in the Prix Jacques le Marois at Deauville.

Jessica Harrington’s filly has arguably been the star of the season so far, following up her Irish 1,000 Guineas triumph with scintillating displays in the Coronation Stakes at Royal Ascot and the Falmouth Stakes at Newmarket.

She was a 10-11 favourite to claim a fourth successive Group One victory in France and her supporters will have had few nervous moments.

Colm O’Donoghue positioned Alpha Centauri on the heels of With You near the stands rail before angling out and allowing his mount to stretch racing inside the final half-mile.

Once again the response was superb as the Irish challenger found another gear to leave her rivals trailing in her wake.

Recoletos was best of the rest in second ahead of With You in third.

Harrington said: “She’s an amazing filly. I must admit, bringing her here to take on colts and older horses, I thought I must be mad. But then again, I felt we might as well keep her going and it was a fantastic performance.

“Three furlongs down she decided it was time to go, which was longer from the finish than I’d hoped, but I could see on the screen that she had the group on the far side behind her and once given her head, she just kept going away from them.

“When she does that, you hope she’s not burning up too much energy because there are several possibilities now.

“She’s in the Matron Stakes at Leopardstown, the Sun Chariot at Newmarket and the mile at Ascot [Queen Elizabeth II Stakes] and if she does make it through to the Breeders’ Cup, it will have been a very long season by then.

“She’s given me a few sleepless nights, I have to admit that, but it’s not quite like training Moscow Flyer as there are no fences to worry about!

“I really want to see how she is before making a definite plan and she will be back home in her stable tonight.”

Advertise became the first British-trained winner of the Keeneland Phoenix Stakes in over 20 years with a workmanlike victory at the Curragh.

Martyn Meade’s colt was the 11-10 favourite in the hands of Frankie Dettori, with three of his four rivals trained by Aidan O’Brien, who had saddled a staggering 16 winners of the race in the last 20 years.

Advertise had finished marginally ahead of the reopposing Sergei Prokofiev when they came home second and third in the Coventry Stakes at Royal Ascot in June, since which Meade’s charge had claimed an impressive victory in the July Stakes at Newmarket.

The Irish Rover adopted a pacesetting role, with Advertise always in his slipstream.

With Sergei Prokofiev failing to fire, The Irish Rover and Advertise settled down to fight it out and were joined by So Perfect racing inside the last of six furlongs.

There was little to split the trio as they raced for the line, but Advertise stuck his neck out to score by half a length, with So Perfect beating The Irish Rover to the runner-up spot.

Advertise is the first British raider to claim the Phoenix Stakes since Mark Johnston’s Princely Heir in 1997.

Meade said: “I’ve been quite bullish about this horse and luckily it’s paid off, otherwise I might have had to eat my words a bit.

“I’m very pleased with him, it’s great, and maybe we’ll step him up to seven furlongs now.

“We’ll give him a bit of a break and then go for the Dewhurst or something like that I suppose. It seems logical and he’ll get further.

“The big question is if he’ll get a mile, but he’ll definitely get seven.

“It was a great result. Obviously I was coming here with a lot of trepidation, but you can tell very good horses at home, going to perform for you, got the form and did the job.

“If you’ve got a good horse it makes a difference, you don’t have to struggle too much then.

“It was a great ride by Frankie and it’s great to have him on board. As he said to me after he won the July Stakes, ‘send him anywhere you like’ and that proved to be right.

“I’m thrilled to bits with him. Every run he’s been held up and produced with a turn of foot, but he was able to dictate today and it shows that he knows his job now.”

There was no joy for the European raiders at Arlington on Saturday evening on a card dominated by Chad Brown.

Brown won the Beverly D Stakes with Sistercharlie, who led home stablemates Fourstar Crook and Thais for a one-two-three while Robert Bruce and Almanaar ensured he provided the first two home in the Arlington Million.

The other Grade One on the card, the Secretariat Stakes, saw Tom Morley’s Carrick spring a surprise when beating Analyze It.

Mark Johnston’s Nyaleti finished sixth in the Beverly D, one place ahead of Aidan O’Brien’s Athena while in the Arlington Million Simon Crisford’s Century Dream crossed the line third but was demoted to fourth.