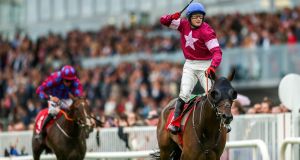 It’s not long since jockey Mark Enright worried his riding career was “on its last legs” but on Wednesday he enjoyed his greatest success when guiding Clarcam to a shock Tote Galway Plate success.

The 33-1 outsider provided Michael O’Leary’s Gigginstown Stud team with a fourth win in five years in the summer’s most prestigious steeplechase while trainer Gordon Elliott added to Lord Scoundrel’s victory in 2016.

But if O’Leary and Elliott are familiar with big race success it’s a different story for the 25-year-old jockey nicknamed ‘Fish’ who last Christmas feared his career was on the skids.

“Around last Christmas the freelance thing wasn’t working out for me so I approached Gordon at the races one day and asked for a job. Gordon’s been brilliant to me. I go in there four or five mornings a week and he gives you so much confidence,” Enright said.

The evidence of that had been obvious earlier on the card with another 33-1 success for Enright on Rovetta in a handicap hurdle. The pair of unlikely big priced winners paid a massive 1,155-1.

However, the scale of adversity Enright has overcome en route to glory in Galway’s €250,000 highlight precedes last Christmas, a factor that added to widespread delight for the popular rider.

In early 2015 the Co Limerick-born jockey was widely praised for going public on a battle with depression which once threatened his future in a much more fundamental manner.

Even the Galway Plate challenge paled in comparison to the scale of Enright’s task in returning to full health, although Wednesday’s race was the most public manifestation to date of his success in that battle.

He had a willing partner in Clarcam, a former dual Grade One winner, who’d looked a light of former days until dominating one of the most competitive fields of the year in style.

Always prominent, Enright and Clarcam got loose from the field at the top of the hill and never looked likely to get caught.

The 9-2 favourite Patricks Park finished runner-up but was six lengths adrift at the line while the winner’s stable companion Jury Duty was third with Snow Falcon in fourth.

“Fair play to Mark,” said Elliott. “He started riding out for us last winter with no promises to get rides. He said ‘look, I just want a base to ride out and if you give me a ride or two, grand’. He only got on the horse at 11.30 the day before so it’s great for him.”

Enright’s first winner, Rovetta, had been first reserve but managed to get a run when one of the field was declared a non-runner.

However, the Plate once again illustrated the unsatisfactory nature of such late additions into high profile and big betting races.

Patricks Park, the ante-post Plate favourite, was first reserve but got into the race when one of his Willie Mullins-trained stable companions, Ballycasey, was declared a non runner due to a “change in going” less than two hours before racing began.

It harked back to 2013 when the JP McManus-owned winner Carlingford Lough was promoted from first reserve after another McManus-owned horse was declared a non-runner due to a change in going.

This latest shuffle saw racing’s most famous jockey, Ruby Walsh, who had been due to ride Saturnas, switching to Patricks Park. David Mullins took over on Saturnas.

Mullins however told the stewards “competing on today’s ground with a large number of runners where he [Ballycasey] would encounter kickback was not suitable for him at this stage of his career.”

His explanation was noted by stewards, who this week generally haven’t been penalising non-runners over ground conditions due to the mixed weather.

No rules were broken and Mullins pointed to the “ridiculous rigmarole” involved in the process of taking Ballycasey out.

However, a system that throws up a scenario where the final make-up of such a high-profile event fluctuates so wildly on the eve of the actual race surely cannot be fit for purpose.

Mullins did saddle his fifth winner of the week when Diamond Hill overcame trouble in running to win the amateur maiden.