Fastest among them was Co Offaly’s Darragh Kenny who stopped the clock on 35.83

Dressage and dresses graced the Dublin Horse Show at the RDS on Thursday the 9th August. Video: Bryan O'Brien 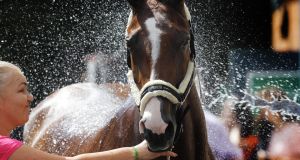 Irish riders dominated the international show jumping action at the RDS on Wednesday, the opening day of the 2018 Stena Line Dublin Horse Show.

In the afternoon’s featured Sport Ireland Classic, 19 riders and horses progressed to the second round where half of the 10 who recorded a double clear represented this country.

Fastest among them was Co Offaly’s Darragh Kenny who stopped the clock on 35.83 with Ann Thompson’s Balou du Reventon.

It was a case of third time lucky for Kenny as he had filled the runner-up position in the two earlier international classes.

In the first international class of the show, the Alpes d’Or speed stakes, where Irish riders filled the first seven places, Kenny and Whiterock Farm’s Billy Manjaro were home clear in 51.82, just behind Derry’s Daniel Coyle on Ariel Grange’s Tienna (51.48).

In the outside show rings, the six-year-old stallion Gortfree Lakeside Lad, ridden for owner and breeder Sean Barker by Linda Murphy, repeated his victory of last year in the performance Irish Draught championship.

While the bulk of the Berney Bros Saddlery Connemara classes take place on Thursday, two performance hunter championships were held on day one, Lisa Murphy winning the five to seven-year-old section on board David Harrison’s Legend’s Mate while, on their fourth attempt, a delighted Alicia Devlin Byrne landed the older pony class with Michael and Theresa Clarke’s Grey Smoke.

Jordon Ibe has been ‘in a dark place’ with depression 09:10
Tokyo under ‘real pressure’ amid rumours of Olympics cancellation 07:20
Jerry Kiernan’s death felt beyond athletics; tennis stars show their full sense of entitlement 07:08
Brandon Nagy reels off 10 birdies to lead at American Express 06:41
Defeat to Burnley ‘a massive punch in the face,’ says Klopp 06:34