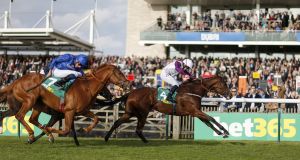 Karl Burke believes Laurens is in the form of her life ahead of her bid for glory in the Darley Yorkshire Oaks on Thursday.

The daughter of Siyouni bids to complete a Group One hat-trick, having landed the Prix Saint-Alary and the Prix de Diane in France since filling the runner-up spot in the 1000 Guineas at Newmarket.

She will be tackling a mile and a half and meeting her elders for the first time next week, but Burke could not have been happier with his stable star following a Friday morning workout on the Middleham gallops.

“She had her final piece of work this morning and she went as well as I’ve seen her, to be honest,” said the Spigot Lodge-based trainer. “We’re very happy with her. She’ll have a pipe-opener on Tuesday and that will be it. We’re looking forward to the race.”

Laurens was one of 11 fillies left in the Yorkshire Oaks at Thursday’s confirmation stage. Her potential rivals include the William Haggas-trained Irish Oaks heroine Sea Of Class, although connections will be keeping a close eye on ground conditions.

“The intention is to go to York, but it depends on the ground and if they get rain. We want to keep her on top of the ground,” said Haggas’ wife and assistant Maureen. “The great thing about York is since they have done the drains, it drains well, whereas it never used to.”

Aidan O’Brien has left in Bye Bye Baby, Flattering, Forever Together and Magic Wand, while Dermot Weld’s Eziyra is another possible Irish raider.