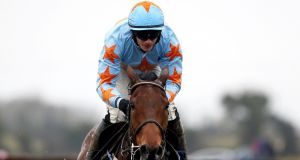 The Cheltenham stalwart Un De Sceaux is giving connections signs he is coming back to his best and an attempt to regain the Ryanair Chase crown is likely to be his festival target next month.

Un De Sceaux won the Ryanair with a spectacular display in 2017 but failed to justify odds-on favouritism when runner-up to Balko Des Flos in the same race last year.

Willie Mullins’s star was an Arkle hero in 2015 and a year later finished runner -up to Sprinter Sacre in the Champion Chase.

“He hasn’t had the ground he wants this season – and that he probably needs as he gets older,” Mullins said on Wednesday.

“He has the same enthusiasm he’s always had. He’s in a particularly good form this week. He did a piece of work yesterday and it was probably the best bit of work he’s done all year.

“He just seems to be coming right at the right time again. If the ground came up very heavy, and some horses don’t turn up in other races then who knows. But I imagine it will be the Ryanair for him,” he added.

Blow By Blow won the two and a half mile contest a year ago before going on to land the Martin Pipe Conditional Jockeys Handicap at the festival.

Harrie is entered for that race as well as the Ballymore and the Albert Bartlett at Cheltenham. The evidence of how he stayed on in the Moscow Flyer over two miles at Punchestown suggests a stamina test plays to the seven year old’s strengths and he gets that here.

His stable companion Real Steel should be tough to beat in the opening chase. After falling at Leopardstown over Christmas, Real Steel was impressive at Fairyhouse when winning by ten lengths.