True Self fails to make the field for Melbourne Cup 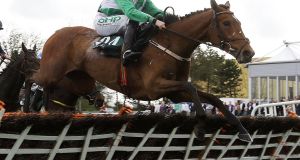 The Melbourne Cup has a maximum field of 24 and True Self just missed the cut at 25. File photograph: Inpho

True Self failed to make the final cut for Tuesday morning’s renewal of the Race that stops a Nation so instead has several other options this weekend.

They include the Group One Mackinnon Stakes over a mile-and-a-quarter, a race worth $2 million in which Joseph O’Brien’s Latrobe was second last year.

The Group Two Matriarch Stakes over the same trip is an alternative for the Irish mare on the same card as is the Group Three Queen Elizabeth Stakes over a mile-and-three-quarters. Both races are worth $300,000.

“We’re looking at the options and also considering who might be available to ride her in what race,” said Mullins on Monday. “She just missed the Melbourne Cup by one – she was 25th I’m told!”

The Melbourne Cup has a maximum field of 24 and True Self’s failure to get a spot continues her trainer’s frustrating run of near misses in Australia’s most famous race.

Mullins came closest to winning when Max Dynamite was an unlucky runner up under Frankie Dettori in 2015. A couple of years later he was third in the race behind Joseph O’Brien’s Rekindling. Mullins also hit the board in 2013 when Simenon finished fourth.

On the domestic front Mullins wasn’t represented in the initial Grade One steeplechase of the winter campaign at Down Royal on Saturday but looks set to dominate the first top-flight hurdle event.

He has won Saturday week’s Unibet Morgiana Hurdle for the last eight years and has six of the 11 entries left in the upcoming renewal.

Last season’s top novice Klassical Dream is 2-5 with the sponsors to make a winning return to action and other options include last year’s surprise winner Sharjah as well as Saldier and Benie Des Dieux.

Mullins had a handful of runners declared for Tuesday’s Fairyhouse fixture but that meeting was cancelled on Monday due to heavy rain. Over 30mm fell up to Monday lunchtime which left the Co Meath track unraceable.

In other news Coolmore Stud has revealed stallion fees for its Irish branch in 2020 with the Newmarket 2,000 Guineas winner Magna Gracia introduced at a fee of €22,500.

Another newcomer to the stallion ranks is the July Cup winner Ten Sovereigns who will cover at €25,000. The other new stallion will be Calyx, last year’s Coventry Stakes winner, at a price of €22,500.

The highest publicly quoted fee on the Coolmore roster is No Nay Never at a cool €150,000. However the fee for the stud’s stalwart performer, Galileo, remains “private”.