No joy for Jessica Harrington at her first Breeders’ Cup 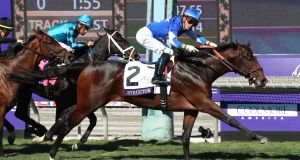 Jessica Harrington’s first Breeders’ Cup ended in frustration when Albigna finished a never-nearer fourth behind Sharing in the $1 million Juvenile Fillies Turf at Santa Anita in California on Friday night.

The big Irish hope was slowly away from the stalls in the mile contest and was at the rear of the field until the final turn-in when Albigna dropped to last under jockey Shane Foley.

As the field broke apart in the straight the Prix Marcel Boussac winner sliced through the field but never looked like getting to the front where the 13-1 shot Sharing emerged best. The English favourite Daayeh kept on to be runner-up under William Buick.

The result completed a 3-0 wipe-out for European hopes in the three turf races on day one of the 36th Breeders’ Cup.

Earlier Aidan O’Brien’s favourite for the Juvenile Turf, Arizona, blew his chance with a slow start and finished up fifth past the post behind Structor.

The Breeders’ Cup got underway with wins for the jockey brothers Jose and Irad Ortiz, the latter earlier landing the Juvenile Turf Sprint on Wesley Ward’s 6-4 favourite Four Wheel Drive.

It was Jose Ortiz who got the Grade One spoils on Structor however in a race where Arizona backers knew their fate when the gates opened.

The big Irish hope broke slowly and had just one of his 13 opponents behind him starting down the backstretch.

“He was a little bit slow [from the stalls] and Ryan [Moore] had to accept it, but he came home very well in the straight,” O’Brien reported.

“A [good] draw is a big help here, none of mine today got lucky with that, although Fleeting and Anthony Van Dyck are drawn well [on Saturday].

“Arizona is definitely a Guineas horse for next year and he finished his race well. Half the trouble is that we teach our horses to settle and relax, but we are playing away here and they do just the opposite. But we’ll take it as it comes,” he added.

That outcome followed the pattern of the earlier Turf Sprint where Frankie Dettori’s fancied mount A’Ali never figured, breaking slowly and being taken back, before racing wide into the straight.

Joseph O’Brien’s Alligator Alley and jockey Wayne Lordan made some late ground up the rail in that race but never threatened the front runners.