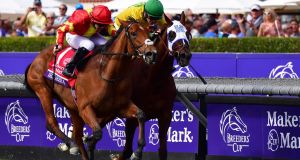 The 26-year-old is also only the second trainer to have tasted Breeders’ Cup glory as a jockey, after Freddy Head, following his Turf triumph aboard St Nicholas Abbey in 2011 — which made him the youngest rider to triumph.

Iridessa was guided to success by Wayne Lordan, who was also opening his Breeders’ Cup account, and he had the Pretty Polly and Matron Stakes heroine in a decent position from the start.

Mirth set the pace and soon built up a big lead, but she was swamped in the straight and it was left to Iridessa and Vasilika to fight out the finish.

Iridessa (8-1) battled on gamely to land the spoils by a neck. Last year’s winner Sistercharlie was a never-nearer three lengths back in third.

O’Brien said: “I was very happy through the race. We just wanted to get a nice position early and she had the early place to do that.

“It was always the plan to finish her season here and we were fortunate to have a good draw and things worked out lovely under a great ride by Wayne.

“It’s unbelievable. I’ve always got a much greater kick training a winner than riding a winner since I stated training.

“It’s a dream, really, I’ve had a handful of Breeders’ Cup runners, but for this to happen it’s very special and it hasn’t sunk in yet.”

He added: “She’s been a great servant to her owner, competing in all the best races and either winning or placing, and I’d love to think she will stay in training next year, when we will run in all the top mile and mile-and-a-quarter races.”

Lordan said: “Joseph never ties you down with riding instructions, other than to suggest I might be in second, third or fourth in the early stages, and it’s a comfort knowing that Joseph has the experience of riding at the Breeders’ Cup.

“She’s a filly who just rolls around and just does enough when she hits the front.”

Later on the card, Aidan O’Brien’s Anthony Van Dyck had to settle for third place as Bricks And Mortar extended his winning sequence to seven when taking the step up to a mile and a half in his stride in the Breeders’ Cup Turf.

Chad Brown’s five-year-old has been transformed since returning from surgery on a hind leg that kept him off the track for 441 days, and continued his amazing run on his first start since he obliged in the Arlington Million in August.

Irad Ortiz Jr bided his time just off the pace on the son of Giant’s Causeway, before unleashing him in the straight. The evens favourite powered into the lead and had enough in hand to hold United by a head.

O’Brien’s Derby hero Anthony Van Dyck did not get the best of runs at a crucial point in the straight, while Old Persian, trained by Charlie Appleby, only beat one of the 12 runners home.

O’Brien said: “It looked like we were checked at a vital stage of the race, which impaired his momentum and in the circumstances he’s run a very good race to finish third. “Mount Everest was taking a big step up in class and will be a lovely horse next year.”