He’s being asked to give 4lb to Native River, the 2018 Cheltenham Gold Cup winner 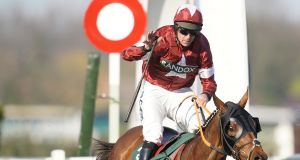 Uncertainty about whether Tiger Roll will bid for an unprecedented third successive victory in the Grand National at Aintree could continue well into next month following the publication of the weights on Tuesday, when Michael O’Leary, the 10-year-old’s owner, received only a small portion of the encouragement he was hoping for from the handicapper for Tiger Roll to line up on April 4th.

Martin Greenwood, the BHA’s senior handicapper, has framed the weights with Tiger Roll alongside Delta Work, his stable companion at the Gordon Elliott yard, at the top of the list on a mark of 170. That is just 1lb below his current official mark of 171, and well below the 8lb “compression” of the top weight that Eddie O’Leary, his brother’s racing manager, has suggested is the “average” over the last 10 years.

“It’s a bit disappointing given the recent history,” Eddie O’Leary said on Tuesday, pointing out that Tiger Roll is being asked to give 4lb to Native River, the 2018 Cheltenham Gold Cup winner. “He’s alongside Delta Work, who’s almost certain not to run, so he’ll be stuck up there on his own.”

Tiger Roll is due to run for the first time since winning his second National when he lines up for the Boyne Hurdle at Navan on Sunday. He is then scheduled to run in the Cross-Country Chase at the Cheltenham Festival in March – and must run in a chase event before Aintree in order to qualify for the National – after which a decision will be taken on whether he will bid to make racing history in April.

“What’s far more important for us at the moment is that he’s a sound, happy horse for Navan on Sunday,” O’Leary said. “Hopefully from there he’ll go to the Cheltenham Festival and then we’ll make a decision, but he will also have an entry in the [GRADE ONE]Betfair Bowl [the day before the National].”

Bristol De Mai, the National top weight last year, and Native River, the 2018 Gold Cup winner, are next in the handicap on marks of 168 and 166 respectively, which are both 2lb below their current BHA rating. Unlike Tiger Roll, however, neither horse has any previous experience of the race.

The biggest loser, meanwhile, seems to be Anibale Fly, who has finished fifth and fourth behind Tiger Roll in the last two Nationals. Last-place finishes in his three runs this season have seen Tony Martin’s chaser slip to an official mark of 158 but he will be asked to run off 162 if he turns up for a third crack at Tiger Roll in April, when he will be 13lb better off for 17-length defeat.

Red Rum, who is buried next to the winning post at Aintree, is the only horse to win three Grand Nationals in the race’s 181-year history, but he needed three more attempts to complete his hat-trick after winning in 1973 and 1974.