Wednesday’s card at Fairyhouse cancelled with Punchestown facing an inspection 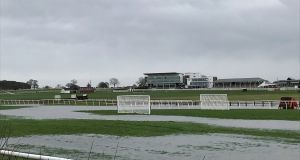 Racing in Ireland continues to be adversely affected by Storm Ciara, with Wednesday’s scheduled meeting at Fairyhouse abandoned, following further rain and with snow forecast.

Meanwhile Punchestown’s Grand National Trial card, rescheduled from Sunday to Tuesday after Storm Ciara caused flash floods there, must pass a morning inspection at 8am.

Exeter’s Sunday meeting has been rearranged to take place next weekend — seven days after Storm Ciara forced it to be abandoned.

Prominent trainers called for the card to be saved — given the good prize money and standard of races on offer — and the whole card, rather than just specific races, will still take place.

Entries will close at 12 noon on Tuesday, with declarations required by Friday as normal.

Stuart Middleton, racing operations manager at the British Horseracing Authority, said: “Having lost yesterday’s fixture due to bad weather, the usual process was followed to assess whether suitable opportunities were available in the race programme for the horses which were declared to run.

“Given the time of year and the specific opportunities that were due to take place yesterday, we felt that on balance the most suitable option was to put on an additional fixture which mirrored the races that were lost.”

Tom Byrne, operations manager at the Horserace Betting Levy Board, said: “It is unusual for the Levy Board to fund a third fixture on a Sunday in February, but we are pleased to be providing a substantial sum in prize money to support the rescheduling of this fixture.

“The meeting includes some significant races in the build-up to the Cheltenham Festival, and we recognise the benefits to horsemen of this particular card at the current time. It will also offer another opportunity to assess the impact of non-standard race times, which the Levy Board has been keen to see trialled as part of the sport’s attempts to reduce race clashes.”

Storm Ciara still continues to cause havoc on the racing front, however, with Tuesday’s meeting at Ayr called off because of a waterlogged track.

A total of 51 millimetres of rain has fallen at the venue since Saturday — and with further rain and strong winds forecast, clerk of the course Graeme Anderson admits there is no chance of conditions improving.

He said: “We had 16mm of rain overnight, which makes it 51mm since 5pm on Saturday.

“We have a further 10-15mm forecast, along with 50 miles per hour winds, so it isn’t going to improve.

“Waterlogging aside, you wouldn’t have raced this morning just for the wind — and unfortunately it’s not due to improve until Wednesday now.”

Lingfield was due to stage jumps action on Tuesday, but that card was also cancelled because of waterlogging.

Wednesday’s meeting at Wetherby is another casualty of the wet weather, with officials calling off the card following an inspection on Monday afternoon.

The back straight at the Yorkshire venue is flooded.

The track tweeted: “Unfortunately, we have had to abandon the race meeting on Wednesday.

“There has been no movement in the water sitting on the back straight, and now there is not sufficient time for it to clear and the ground be safe for the participants.

Gianluigi Buffon at 43: why messing up is key and what makes him happy 09:39
Manchester City go 15 points clear; Gordon D’Arcy on what we can learn from Italy win 07:36
Gordon D’Arcy: Ireland merely picked through the carcass of Italian rugby 06:00
Munster looking to drive home their advantage on Thomond Park run-in 06:00
Connacht know any chance of catching Munster requires Thomond triumph 06:00