Tuesday’s Punchestown card called off due to snow 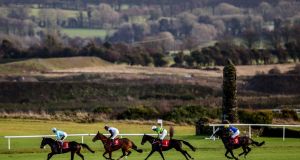 Tuesday’s racing at Punchestown has been called off due to the weather. Photograph: Bryan Keane/Inpho

Tuesday’s meeting at Punchestown has been called off due to snow.

The fixture was due to be staged on Sunday, but flash flooding forced its cancellation and the card was rearranged.

However, the meeting, which was highlighted by the BoyleSports Grand National Trial Handicap Chase, has again been scuppered by the weather.

The track tweeted: “Following a further heavy fall of snow and with further snow showers forecast, the track at Punchestown is now unfit for racing and the fixture scheduled for today has been cancelled.”

This follows on from Monday’s cancellation of Wednesday’s meeting at Fairyhouse.

Meanwhile in the UK Hereford will have to pass an 8am inspection on raceday if Wednesday’s meeting is to go ahead.

With the scheduled card at Wetherby already called off, Hereford is due to stage the only jumps action in Britain.

However, the course is reported to be unraceable at present, with wintry showers also a possibility before racing.

The track tweeted: “The going is heavy but currently unraceable in places with standing water following 9mm rain yesterday. Forecast for chance of wintry showers today and overnight. Inspection 8am tomorrow.”

Thursday’s cards at Kelso and Fontwell are also under threat, with inspections called at both tracks.

Kelso is reported to be waterlogged in places and officials will assess the track at 2pm, with Fontwell checking conditions at 4pm as the course is currently unraceable.