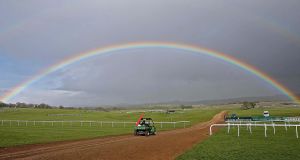 Punchestown officials are “hopeful” Sunday’s cancelled card can be run on Tuesday after losing its second fixture of 2020 to the weather.

Last month Storm Brendan forced a cancellation, and on Sunday morning Storm Ciara claimed the Boylesports Grand National Trial programme after a “freak” cloudburst dropped over an inch of rain in 20 minutes.

News of the cancellation came in an Irish Horseracing Regulatory Board text sent out at 9.23am. That was just over an hour after a previous text which said no more than 10mm more rain was expected, with high winds and rain expected to ease mid-morning.

“We were perfectly raceable at 8am. We were still out on the track, and it was just a cloudburst for 20 minutes. There was 27mm in it. I’ve never witnessed anything like it. There was just one of those freak showers,” said Punchestown spokesman Richie Galway.

It caused flash flooding which left parts of the track waterlogged.

The fixture has been refixed for Tuesday, but a very cold weather outlook, including predictions of snow, means fingers are being kept firmly crossed it can go ahead.

“We’re hopeful we’ll be able to run it on Tuesday. We’re conscious of wanting to run it as quickly as we could, and after reviewing the forecast we think we’ll be okay. But it isn’t a great forecast and we’ll be keeping a close eye on it,” added Galway.

If Met Éireann’s weather forecast was off-target on Sunday, Punchestown is still left counting the cost of cancellation. Admission to Tuesday’s meeting will be free.

“We have commitments and all our sponsors have arrangements in place as well as all of the contractors that were preparing for today,” Galway said.

“We’ve mitigated where possible but on a day like this there will be a financial loss. There will be free admission on Tuesday because obviously it’s a day of work and the attendance will be much diminished.

As much as anything there’s a pride in running our fixtures on the day we’re scheduled to so we’re disappointed to have lost two. It’s understandable given two named weather events coinciding with racing at Punchestown, so we’ve been unlucky. Hopefully that’s the end of the bad luck.”

The stormy conditions also claimed Britain’s two Sunday fixtures at Exeter and Southwell, while there is an 8am inspection planned for Plumpton ahead of its card on Monday.

Racing has already been abandoned at Catterick due to the river Swale bursting its banks, but Wolverhampton is scheduled to go ahead on Monday. That fixture sees the Ado McGuinness-trained Eglish try to repeat his course and distance victory last month in a seven furlong handicap.