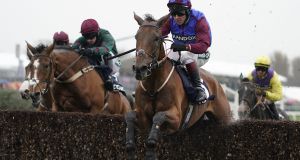 It could be left once again to La Bague Au Roi to fly the cross-channel flag at this weekend’s Dublin Racing Festival. Despite €2.1 million in prize-money being up for grabs just four British-based entries remain among the 16 races after Tuesday’s forfeit stage.

They include the outsider Monsieur Lecoq in Saturday’s €200,000 PCI Irish Champion Hurdle and a pair of JP McManus owned handicap hopefuls trained by Harry Fry.

The only other Grade One contender is La Bague Au Roi. The Warren Greatrex trained star rewarded her connections’ ambition a year ago with a resounding top-flight victory in the Flogas Novice Chase.

She remains the sole British-trained winner over the two years of Irish jump racing’s showpiece and faces a potential mountain to climb in Sunday’s Paddy Power Irish Gold Cup.

No mare has won the €250,000 weekend feature in its 33-year history and ground conditions may decide if La Bague Au Roi tries to make history or stays at home for an alternative engagement at Newbury.

“They tell me that if you can handle Leopardstown you should keep going back because it is a track you need to act on. The ground tends to dry up there which would help,” Greatrex reported.

“From what the forecast says it doesn’t look like the ground is going to be too bad – the better the ground the better our chance,” he added.

La Bague Au Roi is a 33-1 outsider with the big-race sponsors in a market dominated by Kemboy and Delta Work, who landed the Savills Chase at Christmas.

Presenting Percy finished fifth in that race but his owner Philip Reynolds appears confident of better on Sunday. “The truth is I came away disappointed. I know he was only beaten four lengths but it was more the manner of the defeat than the distance.

“I expected him to show up better and that’s another reason why we’re going back as I think he’s better than that. We might ride him slightly differently and I genuinely expect him to be more competitive than in the Savills,” Reynolds reported.

“He was beaten four lengths, finished a close fifth, and I expect him to be more competitive this time. Whatever beats him is going to win on Sunday,” he added.

Monsieur Lecoq is one of 11 remaining in the Champion Hurdle but notable by his absence is the unbeaten novice Envoi Allen.

The going at Leopardstown remains soft and yielding in places on the hurdles course. Selective watering continues on the chase track where the ground is yielding and yielding to soft in places.

Track authorities have outlined their plans to avoid any ‘good’ in the going description on the chase course ahead of the weekend action.