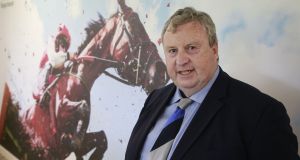 Brian Kavanagh: “Irrespective of what government emerges from the election I’m very confident this industry has a very strong case to make.” Photograph: Nick Bradshaw

Irish racing’s top official has said he does not consider the industry’s funding to be a party political issue.

Horse Racing Ireland’s chief executive Brian Kavanagh said he was confident the case for public money continuing to be put into the industry would survive whatever government emerges from Saturday’s general election.

However, the major story to emerge from the election has been the success of Sinn Féin, which in the past has criticised the amount of money put into the Horse & Greyhound Fund.

In 2017, the current Sinn Féin spokesman on justice and equality, Martin Kenny, said there were serious issues about governance and regulation within the organisations running both horse and greyhound racing.

He also commented on how much State finance goes on prizemoney within racing and ends up with an already well-off and elite sector of society.

“There are very many people who feel that the amount of public money, €80 million, being put into the horse and greyhound racing industry mainly benefits a sector of society which is really a club of very rich people.

“I do understand how some industries and sectors need to get investment in order to stimulate their development and growth. However, this sector is long past that stage,” Kenny said in 2017.

“Sinn Féin calls on the government to end its support of the industry until sufficient reform is implemented,” he added at that time.

In its current election manifesto Sinn Féin said it would conduct a short review of the gambling sector and introduce regulatory reform.

On Sunday, Kavanagh declined to comment on Mr Kenny’s remarks on governance, but did say he was certain racing’s case for government finance was strong.

“It has been made to governments of various different colours over the years. Irrespective of what emerges from this election I’m certain that case will remain as strong as ever,” Kavanagh said.

“I would never consider the funding of the industry a party political issue. It’s up to us to make the case for the industry and its value to all political parties. We do that whether they’re in government or in opposition.

“Irrespective of what government emerges from the election I’m very confident this industry has a very strong case to make.”

The Horse & Greyhound Fund was set up in 2001 and backed by the then minister for finance Charlie McCreevy, and minister for agriculture, the late Joe Walsh.

Since then it has enjoyed widespread support from political parties but in recent years it has come under increasing focus, particularly relating to welfare issues in greyhound racing.

Horse Racing Ireland also backed an increase in the rate of betting tax to 2 per cent which helped yield an 81.6 per cent increase in total off-course betting receipts last year of €95 million. The body said it was the first time betting tax receipts significantly exceeded exchequer funding for horse racing.

However, other sports have also started demanding a share of tax revenue. The Labour Party has called for one eighth of betting duty receipts to be allocated to a new fund for Irish soccer.

A Deloitte report commissioned by Horse Racing Ireland in 2017 said Irish racing and breeding accounted for almost 29,000 jobs, either directly, indirectly, or in secondary employment. “

If you didn’t have this industry in the country, it’s exactly the sort of one you would look to create,” Kavanagh said. “It’s indigenous. It’s based on Irish skills where Irish people have a world advantage. It’s export-led. It brings international money into the country and it’s environmentally sound. It’s probably one of the least intensive forms of agriculture you can have.

“That case remains irrespective of which government emerges from this election.”

On Sunday the Horse Racing Ireland boss also indicated that racing’s proposed new traceability regime would eliminate cases such as the one that saw the Philip Fenton-trained The Tartan Spartan at the centre of a temporary High Court injunction that prevented it running at Naas on Saturday.

Andrew Hughes, the horse’s former trainer and manager of Thistle Bloodstock, which up until recently had been The Tartan Spartan’s registered owner, won the injunction after saying in an affidavit he understood the horse had been put down.

In the affidavit he said he understood the horse had been put down after he gave it to Jim Derwin to euthanise last year after it had broken down. Hughes said he only learned the horse was alive when he saw it entered at Naas.

“A change of ownership at the end of a racing career is not something we register or record now. I think we will record it in future,” Kavanagh said.