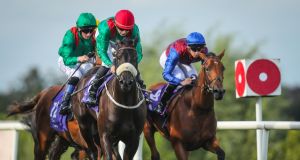 In the midst of spiralling national unemployment figures a body representing stable staff in Ireland say the racing sector here is proving notably resilient at the moment.

Racing came to a halt almost a week ago and won’t resume until April 19th at the earliest after the Government’s ban on sport due to the Covid-19 pandemic.

Nationally a total of 389,000 people have applied for unemployment payment in just two weeks because of the coronavirus crisis.

However the jobs picture currently appears to be more positive on racing’s shop-floor according to the Irish Stable Staff Association (Issa).

Although trainers are facing the bleak prospect of no racing, and some owners are cutting costs by taking horses out of training, Issa reports no major job cuts yet.

“Before the industry met this hurdle they were always struggling for staff so people are reluctant now to let good staff go or put them on a three-day week,” said Paddy Curran, secretary of the Issa, on Monday

“They [trainers] are trying their utmost to hang on to staff and at the moment we’re not seeing people being let go or put on short time.

“We still see that it is early, and we feel it will probably come, but at the moment we’re not seeing it.

The organisation says it represents up to 3,000 stable staff and up to 1,500 others when stud farms are taken into account.

Stable staff were instrumental to 10 race meetings taking place behind closed doors prior to the Government shut down.

With animals still needing to be looked after and exercised staff are having to work within social distancing guidelines on a daily basis in yards.

“At present people are up in the air and they’re hoping. No matter what industry you’re in, you’re hoping to start back and racing is no different,” Curran said.

“Now that’s at the moment. It’s literally day-by-day. Tomorrow that could all change. But without doubt they [trainers] are really trying.

“They are thinking of new ways because they feel if they let staff go they could go somewhere else.

“It varies seasonally but even jumping trainers during the summer, they will try to hang on as there’s a lot of disinfecting and painting boxes and yard work which has to be done,” he added.

However the body representing trainers has warned that the sector is inevitably vulnerable to wider economic considerations when it comes to staying in business while racing is cancelled.

“It’s cash flow. Some horses have gone home. Some owners are not able to pay because their businesses are in trouble as well. It’s a knock-on effect for everybody,” said Michael Grassick, chief executive of the Irish Racehorse Trainers Association (IRTA).

The IRTA had almost 350 members registered with it last year, with another 195 restricted licence holders in the country.

“I’ve been speaking to Horse Racing Ireland (HRI) to see if anything can be done to alleviate trainers who are in a bit of trouble. I think Brian Kavanagh [HRI chief executive] is working on something to see if they can come up with ideas,” said Grassick.

He added that his own organisation has a benevolent fund and added: “If there are any hardship cases we will deal with them on an individual basis.”

The stable staff association continues to be hopeful that a sufficient number of horses will remain in training throughout the shutdown to minimise any impact on jobs.

“We’re like everybody else, relying on the experts. We’re well informed by HRI and regurgitating the information we’re getting to our members.

“There is a collective goodwill. Everyone is coming together. That’s what we’re seeing,” said Curran.

Michael Halford is one of those trainers hoping for a resumption as soon as is appropriate with a number of Classic hopefuls in his Co Kildare stable.

The Aga Khan-owned pair Sinawann and Ridenza are being targeted at the Irish 2,000 and 1,000 Guineas respectively towards the end of May.

Ridenza, a daughter of Sea The Stars, won on her sole start to date at Leopardstown last August, while Sinawaan was last seen finishing runner-up to Aidan O’Brien’s Mogual over Irish Champions Weekend in September.

“Sinawann wintered well and is in good form. His big target is the Irish 2,000 Guineas and we’d love to get a run in beforehand if we can, maybe in something like the Tetrarch Stakes,” said Halford.

“We’re looking at the Irish 1,000 Guineas for Ridenza. We discovered she fractured her pastern on the night she won [at Leopardstown] so she had to have a couple of screws put in and had the rest of the year off.

“She seems to have recovered well and is in good form. Obviously she hasn’t much experience so it would be great to get a run into her before the Guineas if we can.”