All referrals for testing in Cork and Kerry offered appointments on Monday, says HSE 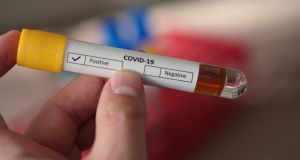 The Cork and Kerry community healthcare group said ‘testing is under way at all four of our centres today’. File photograph: Getty

The coronavirus testing centre at the Pairc Uí Chaoimh stadium in Cork has reopened on Monday after insufficient testing kits forced its closure on Sunday.

The Health Service Executive said all referrals for testing in Cork and Kerry received by close of business on Sunday have been offered appointments on Monday.

“Due to the level of testing our staff carried out last week and over the weekend, as of last Saturday we were up to date with testing of referrals in this region,” said a spokeswoman for the Cork and Kerry community healthcare group.

“No appointments at any of our four test centres were cancelled over the weekend and the centres operated as planned and scheduled. All referrals received by close of business on Sunday have been offered appointments for today. Testing is under way at all four of our centres today to deal with this small number of referrals.”

The spokeswoman said there are “sufficient test kits” to be able to offer appointments to anyone referred by close of business on Monday. “We are currently offering these people appointments for tomorrow, Tuesday,” she said.

The Pairc Uí Chaoimh centre – one of 46 in the country – opened last week with plans to test up to 2,000 people daily when at full capacity.

The facility has 10 testing bays and those with appointments drive into the stadium in batches and are swabbed by test teams wearing protective clothing.

The HSE said more than 33,000 people have been tested since the criteria was changed limiting the procedure to those showing two symptoms rather than one.

More than 15,000 people are still waiting to be tested with about 5,000 people being assessed daily.

HSE chief operations officer Anne O’Connor said some sites had curtailed testing “because of a supply issue around test kits”.

Ms O’Connor told RTÉ’s Morning Ireland on Monday that more testing kits were being sent out today “and even more again tomorrow [Tuesday].”