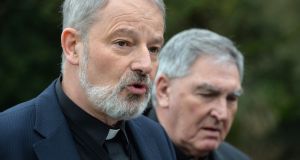 A Catholic bishop has criticised some parishioners who have been putting pressure on priests to celebrate private Masses for them during the coronavirus pandemic.

Bishop of Elphin Kevin Doran said these demands are selfish, not Christian and putting priests and the general public at risk.

Speaking to Ocean FM, Bishop Doran said that while the vast majority of parishioners were following the guidelines laid down by the Department of Health, there were some putting priests under pressure.

“What we’ve been trying to do over the past few weeks is to be supportive of the national effort across all sectors in trying to deal with this virus and protect people, to keep them safe,” he said.

“Having public Mass would be one of the ways of spreading the virus and that’s why two weeks ago we stopped public Mass. Our priests are still saying Mass for the parishoners every day and in many instances it’s broadcast online.

“Some people seem to kind of feel that they’re different and that they should be treated differently, that if they could only get the priest to come to their house, to say mass, then they’d be sorted.”

‘Not a Christian attitude’

Bishop Doran said what he was trying to say to those seeking to have private Masses was “that’s not a Christian attitude, in fact the whole meaning of communion is the willingness to make sacrifice”.

“At the moment the sacrifice they’re being asked to make is actually to stay away,” he said.

Bishop Doran said he and other colleagues were having meetings online two or three times a week to “review this situation and to tweak the guidance based on what’s being asked nationally because it’s important that the church is fully behind the efforts to get rid of the virus”.

“After all healing and care of the sick has always been part of the mission of the church, this is a rather unusual way to ask to do it, but this is it.”

Bishop Doran said clarification was still being sought on how funerals should be staged because the church wanted to minimise the numbers congregating and the potential for the virus to be transmitted.

“Immediate family for the most part are people in daily contact with one another any way, so there’s less risk of exacerbating the situation,” he said.

“We’re still waiting for final clarification on whether that remains the case (with regard to funerals), following the Taoiseach’s latest address. Some things are still happening in terms of Ministerial orders, we’re watching that space.”

Varadkar accused of naivety over ‘Covid penalty’ on mortgage holders 14:26
Learner drivers could be forced to take driving lessons to renew permits 13:20
Covid-19: Small minority of pubs putting health of customers and staff ‘at risk’ 13:05
Six counties had no Covid-19 case over past week 12:51
Aldi Ireland aims to cut plastic packaging by 50% by 2025 12:38