IHRB doesn't want whip to be issue at Champions Weekend 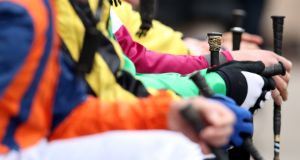 The Irish Horseracing Regulatory Board has said no formal briefings on the whip will be carried out at Leopardstown and the Curragh this weekend. Photograph: Cathal Noonan/Inpho

Racing’s regulator has pointed to June’s incident-free Irish Derby festival as an example of how the whip needs not become an issue in the upcoming Irish Champions Weekend.

After the three-day Derby festival – at which there was not one penalty issued for use of the whip – the Irish Horseracing Regulatory Board (IHRB) declared the bedding in period was over for its new whip regulations that were introduced in April.

However, rules that include a controversial eight-stroke limit have continued to be a contentious issue since then, with the Irish Jockeys Association outlining a “growing groundswell of discontent” among its members.

That appeared to come to a head last week when half a dozen jockeys got six-day bans each having been sent on to a Referrals Committee hearing after a fourth whip offence. They included Derby-winning jockeys Seams Heffernan and Kevin Manning as well as senior Group One winning riders Chris Hayes and Billy Lee.

Afterwards the IHRB’s chief executive described the number of rule breaches as unacceptable.

National Hunt rider Adam Short will be the latest jockey scheduled to appear before a referrals panel on Monday after breaching the rules for a fourth time. On the same day leading amateur Finny Maguire is appealing a two-day ban for use of the whip at Down Royal just over a week ago.

However the prospect of the whip potentially looming as an issue over this weekend’s stellar Group One flat action at Leopardstown and the Curragh cannot be ruled out. Over €4.6 million of prize money is spread across two programmes which feature six Group One races on what is Irish flat racing’s international shop-window event.

The IHRB said on Sunday that no formal briefings on the whip would be carried out at either meeting, including for riders visiting from overseas. “Our rules are more lenient than the British ones, and most of the riders likely to come are British,” said an IHRB spokesman.

When the regulations were introduced in April there were briefings carried out before every race meeting for a number of weeks.

Despite the level of prestige and prize money up for grabs this weekend the IHRB does not believe the whip has to become an unwelcome focal point.

“The Irish Derby was a good example of a weekend where there was a lot of prize money up for grabs, a lot of high-profile races, and there was no offences.

“Like any rules, we always go racing hoping the jockeys will adhere to those rules; they have to adapt, and that’s it,” the spokesman added.

The Niarchos family’s Flaxman operation secured Group One glory in Sunday’s Prix du Moulin when Circus Maximus edged out Romanised in an all-Irish finish at Longchamp.

The Ryan Moore-ridden winner held on to the race after a stewards inquiry despite drifting left across the track in the closing stages and taking his rival with him.

Romanised’s trainer Ken Condon indicated afterwards that an appeal will be lodged against the decision.

Flaxman have another prime top-flight candidate in this Sunday’s Moyglare Stud Stakes in Alpine Star, who is a 4-1 shot for the juvenile fillies highlight.

In comparison the listed feature on day two of the Listowel festival is smaller beer but their hope Up Helly Aa should at least get a chance to run.

Last month the Willie McCreery-trained colt was ruled out of a Group Two at Deauville when the flight taking him from Shannon was suspended when another aircraft caught fire.

Up Helly Aa will instead make just his fourth career start in the Listowel Stakes, where his opposition includes the 2017 winner Riven Light.

Kevin Manning teams up with Riven Light for the first time since that victory, and the partnership will break from the widest draw of all in 16. Riven Light has shown before that he can overcome such a draw, and he should be far happier with this nine furlong test than when asked to go back jumping last time in the Galway Hurdle.

Aidan O’Brien’s Lancaster House is the unknown quantity here, but Up Helly Aa could still prove the solution.

Nap and double: Drombeg Duke and Up Helly Aa