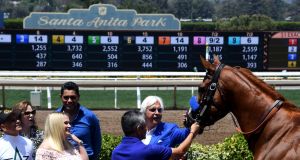 Two horses trained by Hall of Famer Bob Baffert tested positive for a banned substance at a recently concluded meet at Oaklawn Park in Arkansas, according to a person familiar with the testing process. One of the horses, Charlatan, won a division of the Arkansas Derby on May 2nd and was considered a top contender to win the Belmont Stakes on June 20th.

The undefeated Charlatan, as well as his stablemate Gamine, who also won on the May 2nd racing card, tested positive for lidocaine, a local numbing agent, according to the person, who spoke Tuesday on the condition of anonymity because the case had not been fully adjudicated.

The anesthetic is considered a Class 2 drug by the Association of Racing Commissioners International, and use of it carries a penalty of a 15- to 60-day suspension and a fine of $500 to $1,000 for a first offence. In the absence of mitigating circumstances, the horse would also be disqualified and forfeit the purse. Charlatan earned $300,000 for first place.

It is unclear how the case will affect his eligibility for the Belmont Stakes, which will be the first leg of the Triple Crown this year because of rescheduling related to the coronavirus pandemic. Based on his win in Arkansas, Charlatan is ranked fourth on the qualifying-points list for the Kentucky Derby, the traditional first leg of the Triple Crown, which is now scheduled for September 5th.

Baffert has exercised his right to have a second test run on the samples, which can take a week or longer. Jack Wolfe, the managing partner of Starlight Stables, which co-owns the colt, declined to comment and referred questions to Baffert. Four days after Charlatan’s runaway victory in the $500,000 Arkansas Derby, the colt’s stallion rights were sold for an undisclosed sum to Hill ‘n’ Dale Farm.

Lidocaine can be used legitimately for suturing wounds or as a diagnostic tool to determine whether horses are sound enough to compete. The drug may also be present in ointments or creams used on cuts or abrasions. It is regulated because of its potential to mask lameness in an unsound horse.

“Nothing has come before the commission yet - we do not have the facts,” Alex Lieblong, the chairman of the Arkansas Racing Commission, said. “When we get it, there will be no delaying tactics. Anything we can expedite, we will do.”

Louis Cella, the owner and president of Oaklawn Park, said the commission was “grabbing the bull by the horns.”

“We will not have a situation like in California, where a horse ran in the Kentucky Derby after failing a drug test,” Cella said, referring to a test failed by Justify, the 2018 Triple Crown winner. “That was an embarrassment to the industry. We will push to have this cleared up by the Belmont Stakes.”

Last year, it was reported that Justify - also trained by Baffert - had failed a drug test after winning the Santa Anita Derby, nearly a month before the Kentucky Derby. The rule on the books at the time required that Justify be disqualified, forfeiting both his prize money and his entry into the Derby.

California racing officials investigated the failed test for four months, allowing Justify to keep competing long enough to win not only the Derby, but also the Preakness and the Belmont Stakes. In August, after Justify’s breeding rights had been sold for $60 million, the California Horse Racing Board - whose chairman at the time, Chuck Winner, had employed Baffert to train his horses - disposed of the inquiry altogether during a rare closed-door session.

The board ruled that Justify’s positive test for the banned drug scopolamine had been the result of “environmental contamination,” not intentional doping. Baffert has denied any wrongdoing, but the quantity of the drug found in Justify suggested that it was present not because of contamination in his feed or his bedding but rather because of an effort to enhance performance, according to Dr. Rick Sams, who ran the drug lab for the Kentucky Horse Racing Commission from 2011-18.

Mick Ruis, the owner of the second-place horse in the Santa Anita Derby, is in litigation with California officials to have his colt Bolt d’Oro declared the winner and awarded the $600,000 first-place cheque.

In March, federal prosecutors announced the arrests of 27 people, including veterinarians and drug distributors, charging them in a series of indictments with doping racehorses and cheating the public. Among those charged was Jason Servis - who trained Maximum Security, the winner of the 2019 Kentucky Derby for 22 minutes before he was disqualified for interference. Servis, according to prosecutors, was heard on wire taps talking about prohibited joint blockers and blood builders.

The allegations, which were laid out in four indictments, included startling claims that a drug culture had taken hold in the sport. The indictments suggested that horse owners in pursuit of big purses had looked the other way when questionable tactics were employed, and that some trainers who had groused about crooked competitors were afraid to do anything to hold them accountable.

The indictments also described an indifference exhibited by regulators and by racetrack operators like Churchill Downs toward the well-being of the stars of the show, the thoroughbreds. Drug rules and strict punishments were in place; they just were not enforced. – New York Times