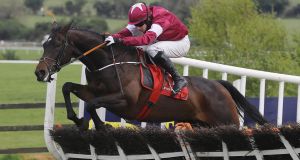 Samcro: will be reunited with Jack Kennedy in the highly-competitive Fighting Fifth Hurdle at Newcastle. Photograph: Lorraine O’Sullivan/Inpho

The horse O’Leary felt it necessary last season to insist isn’t the second coming of Christ lines up in a potentially epic BetVictor Fighting Fifth Hurdle.

Ranged against him are the reigning dual-Champion Hurdle winner Buveur D’Air and last season’s top cross-channel novice Summerville Boy, although his old rival Bedrock, who created the shock of the season to date by beating Samcro at Down Royal last month, is a non-runner.

For a star, once memorably acclaimed by no less than Davy Russell as being as good as we’ll ever see, that defeat removed a substantial amount of gloss from Samcro’s once-gleaming reputation.

Its scale meant debate raged even through the summer about whether or not he would be best going straight over fences or taking a tilt at the Champion Hurdle this season. Odds were even offered on him eventually emulating Dawn Run’s Champion Hurdle-Gold Cup double.

However it’s an unforgiving sort of reputation too, and one that will hardly survive a second defeat in a row. So there is genuine anticipation of what shapes as a mini-championship event at the start of December.

Maybe ultimately Samcro’s novice reputation will get added to the long list of other hyped young stars who failed to live up to expectations. The chance to put it to the test against seniors at Punchestown last Spring proved inconclusive when he fell.

“It’s a big ask. He’s taking on a dual Champion Hurdle winner so it’s a huge ask,” said Gigginstown’s Eddie O’Leary. “At least we’ll known what direction we are going in after this.”

Newcastle’s flat track mightn’t play entirely to Samcro’s strengths. But against that he has the Down Royal experience under his belt whereas Buveur D’Air is having his first start of the new campaign.

Time might yet prove it was Summerville Boy’s capacity to overcome adversity in the Supreme last March that heralded a truly exceptional novice talent.

But, as of now, all eyes will fall on the handsome Irish chestnut and O’Leary’s Gigginstown Stud colours that will be sported by Jack Kennedy on his return to action following a whip suspension.

Kennedy will also be the focus of attention 24 hours later when the 19-year-old rider aims to steer O’Leary’s star mare Apple’s Jade to a Bar One Racing Hatton’s Grace Hurdle hat-trick. Victory in the €125,000 feature of Fairyhouse’s triple-Grade One programme will see Apple’s Jade emulate Solerina (2003-05) as the only horse to win the Hatton’s Grace three years in a row.

The contrast between Solerina emerging from James Bowe’s family farm and O’Leary’s sprawling bloodstock empire could hardly be greater. Gigginstown’s strength-in-depth was vividly illustrated at last year’s Winter Festival when recording an unprecedented clean-sweep of the three Grade One prizes.

Apple’s Jade is back for more and O’Leary is in the enviable position too of possibly having a new white-hot novice hope in Commander Of Fleet who lines up against just four opponents in the Royal Bond Novice Hurdle.

The scarcity of opposition to Commander Of Fleet could be to do with his own unbeaten reputation. But this is a Winter Festival taking place on the sort of ‘good’ ground that would be perfectly acceptable for top flat horses during the summer.

Fairyhouse’s manager Peter Roe said yesterday he is anticipating no more than half an inch of rain by tomorrow which will leave the ground unchanged. “It is lovely safe ground but if you have a winter horse it is a bit quick,” he said.

Such a consideration helped prompt Willie Mullins to go with four runners in the Hatton’s Grace although crucially they don’t include either Laurina or Benie De Dieux. Instead Ruby Walsh, who skips the weekend chases, will be on board Limini.

Anti-doping measures Even conceding the 7lb mares allowance, Supasundae holds a major Hatton’s Grace chance on ratings but it will be his first start of the season. In contrast Apple’s Jade looked back to her best in the Lismullen and should prove hard to beat.

Gigginstown have three in the Drinmore Novice Chase but with ground conditions the way they are O’Leary’s great rival, JP McManus, looks to hold sound claims with Le Richebourg.

In other news, the Irish Horseracing Regulatory Board says it is examining whether or not to replicate the British Horseracing Authority which announced this week that the first four finishers in all major races in Britain are being drug tested. The BHA’s latest anti-doping measures will see the first four horses in all Group races on the flat, and Grade One races over jumps tested.

Yesterday the IHRB confirmed the Willie Mullins-trained Tornado Flyer tested positive for a prohibited substance after winning the Grade One bumper at last April’s Punchestown festival. However the horse has kept the race and the champion trainer hasn’t been sanctioned.

Tornado Flyer tested positive for Cetirizne which has anti-histamine properties. However the levels were well below proposed new screening levels for the substance so the panel exercised its discretion and didn’t impose sanctions.