Footpad on course for a return to action over Christmas 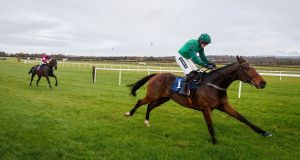 Footpad, with Ruby Walsh on board, lost his unbeaten record with a shock defeat at Naas earlier this month. Photograph: Oisin Keniry/Inpho

Footpad lost his unbeaten record with a shock defeat at Naas earlier this month, exiting at the final fence when looking held by Saint Calvados in a Grade Three event.

He was discovered to have suffered an over-reach afterwards with plans put on hold for a horse who looked to have had the chasing world at his feet this season.

However Willie Mullins has confirmed Footpad is back in work and may return to action at Christmas, possibly in the Grade One Paddys Rewards Club Chase on Day Two of the Leopardstown festival.

“Footpad is back riding out and the over-reach seems to be the only problem so that’s good. He could start fast work by the end of this week,” said Mullins.

“I would imagine we’re looking at Christmas with him, and I imagine it would be two miles at Leopardstown. But we’ll have to see how he is when we school him to make sure he hasn’t lost confidence,” he added.

Mullins also outlined a Christmas objective – and a step up to three miles – for the former Champion Hurdle winner, Faugheen.

He was outpointed by stable companion Sharjah on his return to action in the Morgiana Hurdle at Punchestown earlier this month over two miles.

Supasunde finished runner-up to Apple’s Jade in last year’s renewal of that race before going on to win a pair of Grade Ones over two miles later in the season.

This Sunday’s Bar One Hatton’s Grace Hurdle could see Jessica Harrington’s star return to action after missing out on the Morgiana due to ground conditions being too quick.

“It was unfortunate the ground was a shade quick at Punchestown,” reported Supasundae’s rider, Robbie Power. “The Hatton’s Grace is the race he started in last year so the plan is to start him there again. Once the ground is safe, that’s the plan.”

Supasundae and Joseph O’Brien’s Early Doors are the only two entries of the 16 left in the Hatton’s Grace at the five day stage not trained by Willie Mullins or Gordon Elliott.

Elliott landed last year’s Royal Bond through Mengli Khan and that one’s debut over fences is the star turn at Wednesday’s Punchestown action.

Riders Onthe Storm is another interesting newcomer to fences in the Beginners Chase but Mengli Khan made the frame in Cheltenham’s Supreme and boasts much the best hurdles form of these.

Michael O’Leary’s Gigginstown team have 11 runners overall on the card including three in the opening maiden hurdle. Daly Tiger has some hurdling experience already under his belt which could prove important.