Gordon Elliott: ‘no excuses’ as Samcro gears up for Newcastle 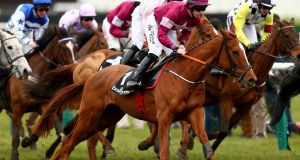 Buveur D’Air, Samcro and Summerville Boy are set to clash in a stellar renewal of the BetVictor Fighting Fifth Hurdle at Newcastle on Saturday.

Gordon Elliott’s Ballymore Novices’ Hurdle winner Samcro had his reputation dented by the reopposing Bedrock on his seasonal return at Down Royal, but is expected to strip much fitter for this Grade One heat.

With Ladbrokes Trophy fancy Kemboy prevented from getting to Newbury from Ireland by bad weather, Elliott was able to confirm that Samcro faced no travel difficulties.

Elliott told At The Races on Thursday afternoon: “The travel is grand. Normally he would go tonight for Saturday, but we went to go this morning to be on the safe side.

“He couldn’t get on the boat this morning at Cork, but he got on the boat at 2pm so he’s on his way to Newcastle.

“I couldn’t be happier with him, he came out of his last race in great form and did a serious bit of work last week.

“There’s no big excuse now, it’s a proper test, like a Champion Hurdle. Buveur D’Air will probably have as hard a race on Saturday as he has had in his last two Champion Hurdles.

“Mick Jazz (stablemate) was beaten three lengths in the Champion Hurdle last year and he wouldn’t get near Samcro. That’s not saying Samcro is good enough, but there’s no excuses.”

Samcro won at Cheltenham over two miles and five furlongs, but Elliott feels he has the speed for two miles at the highest level.

He went on: “I’m as sure as I can be he’s fast enough. The thing about this game is it’s all about opinions.

“The gloss was taken off him when he got beat the last day, so he has to prove it now, but I’ve not had too many horses like him. Whether he’s good enough, the talk will end on Saturday — if not there are other roads to go.”

Dual Champion Hurdle hero and last year’s winner of this race, Buveur D’Air is unbeaten in his last 10 races, two of which came over fences.

Summerville Boy is another leading contender having won the Supreme Novices’ Hurdle in March, despite flattening the final two flights.

Tom George’s charge will aim to emulate Go Native, the last horse to win the Supreme and go on to take the Fighting Fifth, while Samcro would be repeating a feat last achieved by Peddlers Cross having won the longer novice race at Cheltenham.

Bedrock bids to follow up his Grade Two success in Northern Ireland for Iain Jardine, while Colin Tizzard’s Vision Des Flos finished second in Grade Ones at Aintree and Punchestown last season.