Jack Kennedy and Samcro together for Buveur D’Air showdown 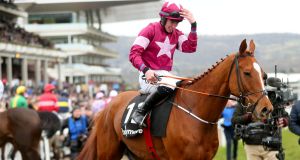 The Ryanair boss’s hottest prospect was dramatically beaten by Bedrock on his first start of the season at Down Royal earlier this month.

The pair are set to meet again in Saturday’s Betvictor Fighting Fifth Hurdle although the prospect of Samcro clashing with the dual-Champion Hurdle winner Buveur D’Air could prove the most intriguing element to this Grade One feature.

With another Cheltenham festival winner in Summerville Boy also among the seven left in the Fighting Fifth on Monday the stage is set for a potentially mouth-watering clash of the sport’s top hurdlers.

It will also be a high profile return to action for Kennedy who finishes on Saturday a whip suspension picked up on the same day he and Samcro tasted defeat at Down Royal. It was a sixth ban picked up the 19-year-old rider for his use of the whip in 2018.

Kennedy was originally given a ten day ban at Down Royal that was reduced to eight on appeal. The spectacular pay-off of that reduction is the prospect of riding Samcro at Newcastle and another Gigginstown star, Apple’s Jade, in Sunday’s Bar One Hatton’s Grace Hurdle at Fairyhouse.

Apple’s Jade is already odds-on to make it a Hatton’s Grace hat-trick at the ‘Winter Festival.’ However much of the weekend attention will be on Samcro who was a late defector from Punchestown’s recent Morgiana Hurdle due to ground conditions.

A wet weather outlook for the North East of England suggests the going will be fine for Gigginstown Stud’s biggest hope as he bids to restore a reputation tarnished somewhat by that defeat at Down Royal.

Kennedy was beaten a nose on Apple’s Jade in the 2016 Fighting Fifth and suspects Newcastle will be no problem to Samcro.

“It’s a big galloping track so I think it should suit him. I image the two miles will be okay,” he said on Monday. “It was disappointing to get beat the last day but actually it wasn’t a bad run. The other horse (Bedrock) had a couple of runs under his belt so had the upper hand fitness wise.”

Sharjah finished third in that Down Royal contest and has since won the Morgiana to put a more positive complexion on the form.

Initial bookmaker reaction to Monday’s forfeit stage however was to make JP McManus’s double champion Buveur D’Air favourite with Samcro next best at a general 7-4.

The Gigginstown spokesman Eddie O’Leary confirmed that plans are for Apple’s Jade to head to Fairyhouse despite her being left in the Fighting Fifth. He also indicated the Newcastle race represents a critical test of Samcro’s Champion Hurdle ambitions.

“It’s a huge step taking on a Champion Hurdler. Unfortunately we are in a position where we have to go there as we couldn’t run the last day (in the Morgiana). There’s no point hiding. We’ll find out if we’re a two mile Champion Hurdle horse or not,” O’Leary said.

“There’s no point going to the Hatton’s Grace, going two and a half miles and still wondering if he’s a two-miler or not. Hopefully he’ll get there and there’s plenty rain in the forecast,” he added.

Apple’s Jade is on course for her weekend assignment and has the prospect of emulating another star mare in the Hatton’s Grace.

James Bowe’s Solerina famously won the centrepiece to Sunday’s triple-Grade One card three years in a row between 2003 and 2005. Her stable companion Limestone Lad also landed the race three times, memorably beating Istabraq in 1999 before also wining in 2001 and 2002.

Apple’s Jade bounced back to form on her first start of the campaign with an impressive success in Navan’s Lismullen Hurdle.

“She seemed back to her best, back to being a bully: when she’s a bully she’s on form. She wasn’t last year. She was going around like a quiet cat. But she’s back to her bullying self and when she’s like that she is very good,” Eddie O’Leary said.

“Sunday’s card will also include the Grade One Drinmore Novice Chase which the Gigginstown team has won five times in the last seven years including with the subsequent Gold Cup hero Don Cossack.

P McManus interrupted the run of success in 2016 with Coney Island and Joseph O’Brien’s Le Richebourg is set to try and maintain his progress over fences for the owner this Sunday.

“He’s a good hurdler but he’s taken a step up over fences into being a good Graded horse. This will be a first real test in a Grade One,” O’Brien reported.

“His couple of runs over fences have been good. They’ve been on nice ground which he seems to handle quite well. A lot of people want juice in the ground whereas this horse likes a bit of nice ground,” he added.