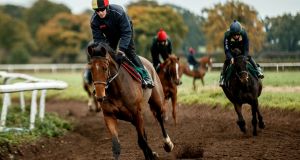 Laurina ridden by Paul Townend at Willie Mullins’ base in Closutton, Co Carlow. Could be primed to face Apple’s Jade on Sunday. Photograph: James Crombie/Inpho

Willie Mullins maintains ground conditions will be a “big factor” in whether or not he considers Sunday’s Bar One Hatton’s Grace Hurdle for his star mares Laurina and Benie Des Dieux.

As expected Apple’s Jade is on course to try and make it three-in-a-row in the €125,000 centrepiece to Fairyhouse’s triple-Grade One ‘Winter Festival’ programme.

However if the Gordon Elliott-trained star was to be taken on by either or both of Mullins’s top mares it would make an enthralling weekend prospect for race fans. So not for the first time much of the ‘Winter Festival’ build-up is likely to be dominated by weather considerations although this time track authorities are hoping conditions take a turn for the wetter.

The going at Fairyhouse on Tuesday was ‘good to firm’ in places. Mullins took Laurina out of an intended target at Ascot last weekend due to quick ground and is anxious for conditions to ease.

“I imagine the ground will be a big factor in what we do. We need all the rain we can get and then see how the racecourse takes it,” the champion trainer said on Tuesday.

Mullins has half of the 16 entries left in the Hatton’s Grace after the five-day stage. He immediately nominated last season’s Champion Hurdle runner-up Melon among a list of definite starters that also includes Shaneshill and Wicklow Brave.

There is huge anticipation though around the possible reappearance too of last season’s Cheltenham festival winners Laurina and Benie Des Dieux.

The latter got the better of Apple’s Jade at both Cheltenham and Punchestown and disputes favouritism for the festival’s OLBG Hurdle with her old rival.

However it is the prospect of Laurina taking on senior opposition for the first time that will excite many fans. The 18-length Cheltenham festival winner is unbeaten in four starts for Mullins and is already a 5-1 third favourite for the Champion Hurdle in March.

“Both [Laurina and Benie Des Dieux] are being prepared for it,” Mullins added. “But I don’t want to nominate horses and then find I’m not happy with the ground. We’ll have to see.”

Fairyhouse’s manager Peter Roe said on Tuesday: “We described it as good, good to firm in places, this morning. The good to firm was only on about 50 yards of ground and 6mms of rain after that will have adjusted it.

“There’s heavy overnight rain forecast and then some showers through the week so I imagine it will be good jumping ground, maybe good to yielding, for Saturday and Sunday.

“When Apple’s Jade won in 2016 it was good to yielding and yielding in places. It might be a bit better than that and I’m happy with the ground.”

It presents a new weather challenge to the ‘Winter Festival’ organisers who in the past have had to battle the elements.

In 2010 the festival was famously postponed five times due to snow before eventually being run 17 days late. The year before waterlogging meant cancellation. In 2006 hurricane force winds saw the Grade One programme cancelled after two races.