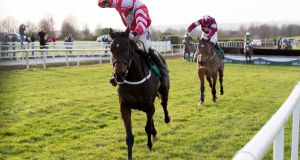 Total Recall helped Willie Mullins settle an old score with Newbury’s Ladbrokes Trophy a year ago and the horse could try to win the prestigious handicap again this Saturday.

Total Recall is one of half a dozen Mullins horses among 23 remaining in the race formerly known as the Hennessy Gold Cup after Monday’s forfeit stage.

He was a first Irish-trained winner of the historic race in 37 years when getting the best of a memorable finish with Whisper last year, a victory that proved particularly sweet for his trainer.

Mullins saddled Be My Royal to “win” in 2002 only for the horse to be subsequently disqualified for failing a drugs test due to contaminated feed.

Ireland’s champion trainer wound up taking the case as far as the British high court but without success.

Total Recall’s task in repeating that feat can be gauged by how only the peerless Arkle (1964-65) has managed to win the contest back to back. Bookmakers appear to believe Kemboy is Mullins’s best chance this time.

He is a 6-1 shot behind the general favourite Elegant Escape although Mullins’s other options include the Cheltenham Festival winner Rathvinden and Al Boum Photo.

The latter hasn’t been seen in action since dramatically running out before the final fence of a Grade One at the Punchestown festival last April. His rider Paul Townend was subsequently banned for 21 days for dangerous riding.

Paul Nicholls won the race three times under its old Hennessy banner including twice with Denman in 2007 and 2009. He plans on running the Charlie Hall Chase runner-up Black Corton this time.

“He’s fit and well and I’m quite surprised he’s a 25-1 shot considering we beat Elegant Escape in a Grade One at Kempton and then were only just beaten by him at Newbury giving weight away,” Nicholls said.

“He probably ran a career best in the Charlie Hall at the weights and that puts him in the mix as a lively outsider.

“I’m not saying he’s going to win because he is not a Denman or a Kauto Star. But he is a tough genuine horse that has got a good each way chance. Bryony [Frost] will ride him on Saturday again,” he added.

Elegant Escape jumped to the top of the ante-post betting when winning on his return to action for Colin Tizzard at Sandown earlier this month.

His stable companion, the reigning Cheltenham Gold Cup holder Native River finished runner-up to Bristol De Mai in Saturday’s Betfair Chase and is likely to skip a trip to Leopardstown next month for the Christmas Chase.

Instead Native River is set to take on Bristol De Mai again in the King George VI Chase at Kempton.

“I think we’ll still probably go to Kempton rather than take him to Ireland,” said his owner Garth Broom.

“He’s come out of the race really well. Everything is fine. But I would think it’s more likely we’ll head to Kempton.

“Obviously Kempton might not play to his strengths as much as Cheltenham but if he goes there and puts up a similar performance was we build up to the Gold Cup we’ll be happy.

“He ran all right in the Feltham there as a novice. But he wasn’t the horse he is now and it was partly human error that day because we held him up. We ride him a lot differently now.

“I think you’ve still got to be a fair stayer to win the King George because they tend to get racing a long way out. It brings stamina into play. It also tends to suit those who race prominently,” he added.