Samcro and Buveur D’Air on course for Newcastle clash 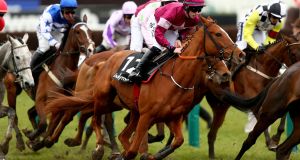 Rain arrived in the north-east of England on Tuesday afternoon and the timing could not have been better, as Newcastle remains on course to stage one of the best jump races in its long history.

Samcro, Buveur D’Air and Summerville Boy, who were all Grade One winners at Cheltenham in March, are among the potential runners in the Fighting Fifth Hurdle on December 1st and with the ground starting to ease after one of the driest summers for years, all three could now line up at Gosforth Park next month.

A first meeting between Buveur D’Air, the dual Champion Hurdle winner, and Samcro, who took last season’s Ballymore Novice Hurdle, certainly seems more likely after Nicky Henderson, Buveur D’Air’s trainer, said on Tuesday that the possibility of “good or good-to-firm” was his main concern ahead of the Fighting Fifth.

“There is a problem looming,” Henderson said, “and while this wind is in the east, you aren’t going to see much rain.”

Up at Newcastle, though, James Armstrong, the track’s clerk of the course, had some good news for the champion trainer.

“We’ve had about 5mm so far and there’s significant rain forecast for the next 24 hours, possibly 8mm to 10mm tomorrow. Come the end of the week, I wouldn’t be surprised to see it good, good-to-soft depending on what we’ve had and once it’s turned, it won’t change a huge amount even if it’s dry.

“Everyone thought it rode very well for our first meeting of the year when the hurdles course was predominantly good, and our first two meetings are usually the ones with the best ground. It can end up being pretty testing for the rest of the year.”

Samcro was backed down to favouritism for the Champion Hurdle before his return to action in the WKD Hurdle at Down Royal earlier this month, but he looked in need of the race as he finished one-and-a-half lengths behind Iain Jardine’s Bedrock.

He remains second-favourite behind Buveur D’Air in the ante-post markets for the Cheltenham Festival, though, and while Samcro is entered at Ascot on Saturday, Gordon Elliott, his trainer, said the plan is to head to Newcastle.

Summerville Boy, the Supreme Novice Hurdle winner, is another possible runner although Tom George, his trainer, was reluctant to confirm plans for his six-year-old, while Bedrock is also thought to be in the running to renew his acquaintance with Samcro.

“If three or four of the main protagonists turn up we’ll be standing in a pretty exciting position come off-time on December 1st. It could be one of the best hurdle races outside of the Champion Hurdle itself,” said Armstrong.