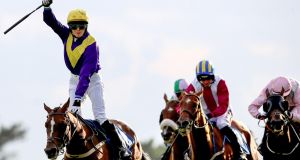 The legendary Aubrey Brabazon rode Cottage Rake to a Gold Cup hat-trick nearly 70 years ago and a verse famously said that bookies quaked when he was up.

The €100,000 Connacht Hotel Handicap is Ireland’s most coveted amateur prize and boasts a luminous list of winning riders, many of whom professional in all but name, including Whiskey Sour’s trainer Willie Mullins.

But the newest name on the list, 19-year-old Aubrey McMahon, injected a real amateur element as he powered the 16-1 winner home almost three lengths clear of the 5-1 favourite Swamp Fox.

It was just a third ever winner for the Celbridge jockey who carried the colours of his father, the former bookmaker, Luke McMahon, on Whiskey Sour in what emerged as a fairytale Galway result for connections.

“I’ve been coming to Galway since I was five or six. It’s a great thrill just to ride here. But it doesn’t get any better than winning here,” said McMahon who rode his first winner almost three years ago. “Amateurs riding all their lives dream of winning this race. I can’t really believe it’s happened.”

If the betting ring was happy to see another favourite beaten on an evening for outsiders there was also widespread delight for their former colleague and winning owner.

“To see your son like that, I can’t put it into words,” said McMahon Snr. “He’s only about 10 rides and doesn’t get outside rides but he might get a few more now. He never panicked.”

Mullins also filled third and fourth with Lagostovegas and Digeanta as he won the race for the first time as a trainer. His son Patrick had to settle for third but the champion trainer was lavish in his praise of the winning rider who far from panicked in a feature run at an unusually slow early pace.

“This is a tough race, where you have more hard luck stories than most races. But Aubrey was very good. He didn’t go for gaps that weren’t there and waited for daylight to come with his challenge,” he said. “I thought it was a very good ride for a 7lb claimer, especially around Galway.”

That challenge saw Whiskey Sour swoop on the outside to put daylight between himself and placed horses who passed the post separated by a head and a nose. Considering Whiskey Sour won a flat maiden over seven furlongs at the track in 2015 perhaps such a kick shouldn’t have been a surprise despite having been sent hurdling.

“I hadn’t realised he’d won in Galway before and when I went back through his form I put him in everything I could,” Mullins said. “He’s in the mile and a half on Friday and I’d say he’ll go.”

If Barry Geraghty followed his own fairytale script with a winning first ride back from a broken arm on board the odds-on Le Richebourg in the opening novice hurdle – “it’s great to be back,” he said – much of the rest of Day One belonged to the layers.

Not that it mattered to local trainer Shane Ryder whose 20-1 shot Pateen gave him a first ever Galway victory in the handicap hurdle.

“This is Cheltenham for me,” he said after Pateen’s jockey Paddy Kennedy grabbed the initiative from the second last to hold the favourite Artful Artist who was hampered at the top of the hill.

Le Richebourg’s trainer Joseph O’Brien had another odds-on favourite in the juvenile maiden but Medal Of Honour was only fourth behind the 14-1 Spiorad Saoirse.

The winner was gelded after his Cork debut in May and clearly didn’t hold a grudge as he battled hard to short-head Quizical in the juvenile maiden.

“When he was a colt we were doubting his resolution but he showed it there so that worked anyway,” said trainer Andy Slattery of the 14-1 winner who was a “cast off” from Sheikh Hamdan’s Shadwell operation.

Dinky Inty added to the bookies benefit with her own 16-1 success in the mile and a half handicap and even Mullins’s bumper success with Poet Power saw the winner priced at 6-1 with the favourite Boris Grishenko out of the frame.