Paul Gilligan granted permission on ‘compassionate grounds’ on ‘once off’ basis 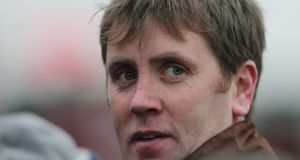 The Cheltenham festival-winning trainer Paul Gilligan was granted permission by the Turf Club on “compassionate grounds” to attend Roscommon races last week in order to watch his son’s first racecourse rides as a jockey.

Co Galway-based Gilligan was ‘warned off’ for 18 months by Irish racing’s regulatory body in April over the Dubawi Phantom ‘flapping’ controversy which was uncovered by the British Horseracing Authority.

They established that prior to Dubawi Phantom winning a race at Uttoxeter in June of 2014, the horse had raced as ‘Ayres Rock’ at an unregistered ‘flapper’ meeting at Dingle in 2013.

The BHA disqualified Gilligan for six months in December. That ban was reciprocated by the Turf Club and in April it imposed an 18 month disqualification of its own.

That penalty was based on Gilligan running the horse in Ireland on three occasions when he knew, or should have known, the horse had raced at an unrecognised meeting.

It was taken into account how Gilligan, who trained Berties Dream to win the Albert Bartlett Hurdle at Cheltenham in 2010, had got a suspended one-year ban in 2013 after a dispute in relation to the ownership of the Grade Three winning chaser, Wellforth.

Disqualification from racing involves not being allowed attend race-meetings.

Gilligan’s son, Liam, had his first rides as a jockey at Roscommon last Tuesday and a Turf Club spokesman explained that Gilligan was allowed attend the race-meeting on a “once off basis”.

Under the Rules of Racing, stewards “shall exclude from all places under their control every ‘Disqualified Person’ and all such persons or descriptions of person as they may from time to time be required by the stewards of the governing bodies to exclude”.

The spokesman added: “It’s the first time we’ve had such a request and because of the nature of the request, and he sought permission in advance, it was given to him. But other than that it wouldn’t have been given. It was purely on compassionate grounds and it won’t be happening again.”

Liam Gilligan finished unplaced on his two rides in hurdles races at Roscommon. He also rode at Sligo on Sunday when brought down at the first flight in a maiden hurdle.

Gold Cup-winning jockey Robbie Power was injured at the same obstacle and isn’t expected to resume race-riding until the Galway festival at the end of this month.

“Robbie’s got concussion, multiple facial lacerations and dental injuries,” reported the Turf Club’s medical officer, Dr Adrian McGoldrick. “He had temporary treatment in Sligo Hospital and he’s seeing his dentist. He should be back for Galway.”

Power misses out on Tuesday evening’s Killarney action where his Cheltenham festival winning partner, Rock The World, is one of two Jessica Harrington runners in the €50,000 handicap chase.

The Grand Annual winner will relish the quick ground conditions but so will his stable companion Mr Fiftyone who appears best at the minimum trip on fast going.

Fozzy Stack’s father, Tommy, was always one to respect at tracks in his native Kerry and his son could enjoy a good evening on the flat.

Aldawayfornothing has first-time blinkers and is stretched out in trip for her first handicap start while quick going may be crucial to Breeze’s chance in the opening maiden.

Birds Of Prey starts here over the course and distance he was odds-on last August when runner-up to no less than the subsequent Derby hero, Wings Of Eagles. His recent Naas start however wasn’t too encouraging while Breeze ran well on fast ground at Limerick in April.