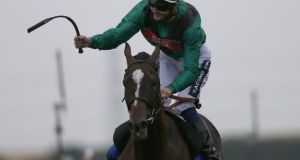 Henry Candy will walk the course at Goodwood before deciding whether to run Limato in the Qatar Lennox Stakes on Tuesday.

The five-year-old has been at the head of the ante-post betting for the seven-furlong Group Two, but is at his best on a quick surface, as he showed when winning the July Cup and the Prix de la Foret last season.

He has not run beyond six furlongs so far this term, over which he has been placed in both the Diamond Jubilee Stakes and when defending his July Cup crown.

“I’ll wait until I walk the course. He will only run if the ground is suitable,” said Candy.

Dean Ivory is happy to give Librisa Breeze a crack over seven furlongs in Group company.

The Mount Nelson gelding produced a tremendous turn of foot for jockey Robert Winston to land a highly competitive handicap at Ascot over that distance in October and made a pleasing comeback after eight months off the track when fourth to The Tin Man in the Diamond Jubilee at Royal Ascot.

“Over seven furlongs Robert can ride a bit more of a race, when he’s over six it all just happens a bit quick,” said Ivory.

“That’s providing he doesn’t get too far back, mind – the horse got him out of trouble that day at Ascot.

“You can do that in a handicap, maybe, but not against the best sprinters around, you can’t give them ground.”

Godolphin will launch a four-horse assault with Dutch Connection, Home Of The Brave, Jungle Cat and Dream Castle.

Last year’s winner Dutch Connection bids to be only the second horse after Nayyir in 2002-03 to land back-to-back victories.

The five-year-old is trained by Charlie Hills, who also has Fitri Hay’s Jallota in the line-up.

Dutch Connection had Godolphin colleague Home Of The Brave second last year but has been unplaced in four Group One races subsequently and was sixth in the Group Two Minstrel Stakes at the Curragh on his latest start.

“Dutch Connection was disappointing in Ireland, but they went no gallop and he was caught on the outside,” Hills told godolphin.com.

“He loves Goodwood, having won twice at the course including this race last year, and I am hoping that he can bounce back to his best.”

In contrast, Home Of The Brave has won both his races this season, latterly beating Jungle Cat by three-quarters of a length in the Criterion Stakes at Newmarket.

“Home Of The Brave has made a good start to this season and we hope that continues in the Lennox Stakes,” said Palmer.

“He is a horse who responds well to having a bit of time between his races.”

Jungle Cat has the bonus of a win at Haydock on his latest start which his trainer Charlie Appleby believes will have done his confidence the world of good.

“It is great that Jungle Cat got his head back in front on his last start, which will have helped his confidence,” said Appleby.

“He has had three nice runs over seven furlongs and comes into this race in good order.

“If he puts his best foot forward, he will be thereabouts for the places.”

Dream Castle, fifth in the 2000 Guineas and Jersey Stakes, is one of two three-year-olds taking on older horses along with Aidan O’Brien’s Spirit Of Valor.

“I am pleased with Dream Castle, who is in good form,” said his trainer Saeed bin Suroor.

“He has worked well on the Limekilns gallops coming into this race. I don’t think the good to soft going will cause him problems.

“I was happy with his last two runs and am hoping for another good performance on Tuesday.”