Trainer behind Yarmouth controversy says it was ‘human error’

McBride: ‘It was a complete accident. There was no collusion and no ulterior motive’ 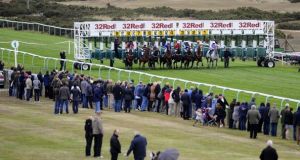 A view of the stalls at Yarmouth racecourse, where the controversy took place on Thursday. Photograph: Alan Crowhurst/Getty

Trainer Charlie McBride insists there was “no collusion and no ulterior motive” behind the embarrassing chain events that led to the wrong horse winning the opening race at Yarmouth on Thursday.

The Newmarket handler thought he had saddled 50-1 shot Mandarin Princess to win the opening two-year-old race at the Norfolk circuit, but it was stablemate Millie’s Kiss who passed the post in first place.

Millie’s Kiss is a year older than Mandarin Princess and was due to run later on the same card in a race from which she was withdrawn by the Yarmouth stewards.

McBride said: “It was a complete accident. There was no collusion and no ulterior motive.

“It was human error.”

The mistake was discovered after the huge outsider, ridden by John Egan, had overturned the 4-6 favourite Fyre Cay in the six-furlong novice auction stakes for juveniles.

As the weigh-in had been announced, the result was allowed to stand — though but most bookmakers paid out on the first and second horses to have crossed the line.

The British Horseracing Authority will launch an investigation and said it will “determine what steps need to be put in place to prevent it from happening again”.

McBride accepted he was on “auto-pilot” and in a “mad rush” to saddle what he thought was Mandarin Princess before the first race of the day at 1.40pm.

He said: “I waiting for the saddle at 1pm in the weighing room. John (Egan) weighed in 1lb over and was in the sauna, and that was why we were late trying to get the saddle.

“We put the saddle on in two minutes flat without even thinking it was the wrong horse.

“I never even watched the filly go round (the parade ring) and then watched her canter away.

“When she won, everyone was euphoric and were hugging and kissing and chatting away to me. Even then it still didn’t occur to me it was the wrong filly.

“I was too engrossed with the owners, the press, and the presentation of the trophy.

“Even her owners, who see her every week, didn’t even notice it was the wrong horse and were patting the filly in the winner’s enclosure.

“When you’re in a mad rush like that, you go on auto-pilot — you go through the motions.”

McBride accepted full responsibility for the Yarmouth fiasco and is expecting to be fined by the BHA.

He said: “There is obviously no excuse for not recognising it was the wrong horse. I know them both inside out and have ridden both horses.

“Every trainer who has contacted me has wished me well and said it was just one of those unfortunate incidents that could have happened to anyone.

“I came over here as a 14-year-old and I’m now 66. I have been in racing all of my life so I’d be disappointed if I was banned for one mistake.

“I expect I will get fined, but it was a human error — as simple as that.”