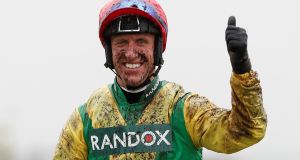 Robbie Power partners Chris’s Dream in the Grade One contest at Down Royal. Photograph: Paul Childs/Reuters

Robbie Power’s first trip back to Ireland since coronavirus restrictions forced him to relocate to Britain fits in with an initial theme to Down Royal’s action on Saturday.

The jockey returns to team up with Chris’s Dream in the first Grade One of the National Hunt season, the €125,000 Ladbrokes Champion Chase.

Like Gordon Elliott’s two big hopes, Delta Work and Presenting Percy, this will be Chris’s Dream’s opening start of the campaign and his track record of winning first-time-out could prove decisive.

Power will hope so as he takes advantage of the exemption for overseas sportspeople which allows jockeys ride in Ireland on Grade One race-days.

Earlier this month the Gold Cup and Grand National-winning rider moved cross-channel after concluding that regularly travelling between Ireland and Britain was impractical under the circumstances of Covid-19.

But the return of Grade One action indicates how the jump campaign is hitting top gear and Power teams up with his old ally Jesscia Harrington for three rides on Saturday as well as Chris’s Dream in the big race.

Delta Work leads a four-strong Gigginstown team as Ryanair boss Michael O’Leary tries to win it for an eighth year in a row.

However it is Presenting Percy’s first run for Elliott, after being moved by owner Philip Reynolds from Pat Kelly, which will be the focus of a lot of attention.

With Davy Russell out injured, his fellow Youghal jockey Denis O’Regan takes over on Presenting Percy who fell two out in the Gold Cup last March.

Delta Work was fifth in that Gold Cup after a less than fluent round of jumping. He did something similar in this race a year ago but being reunited with Jack Kennedy could help him in that regard.

Chris’s Dream was tenth at Cheltenham when possibly finding the trip too far and also having run at Gowran four weeks before.

His previous form suggests his best runs have come when fresh, including landing the Troytown first time out last year under Power.

Willie Mullins once again skips the big race this year but will hope race fitness can swing the following Grade Two chase Easy Game’s way rather than Samcro’s.

If the high-powered Cheveley Park Stud team plans to reduce their flat string then their National Hunt strength is stamped all over Saturday’s undercard.

The expensive trio of Quilixios, Ballyadam and Sir Gerhard are difficult to oppose in their respective races