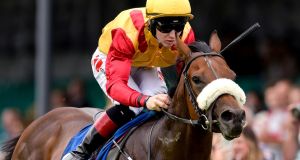 Colin Keane is bidding to claim the jockeys’ championship for the first time: “ I have the height of regard for Colin Keane. He is an excellent young rider. It will be very close,” said Dermot Weld. Photograph: Tom Beary/Inpho

Both riders have six rides each at Gowran on Wednesday with Keane leading his rival by a single winner (82-81) as he pursues a first senior jockeys’ crown.

Gowran is one of 13 meetings left overall before the season finishes at Naas on November 5th and Smullen is a general 4-7 favourite to have regained the initiative by then.

In the short term though Keane’s main employer Ger Lyons supplies three of his Gowran rides and two of them, Inscribe and World War, could give the 23 -year-old jockey excellent opportunities to extend his lead.

In contrast, Weld is responsible for just one of Smullen’s half-dozen mounts at the Co Kilkenny track and significantly the Curragh trainer maintains he doesn’t have a huge amount of ammunition to supply his old ally with a potentially decisive edge in the championship battle.

“I don’t have that many fresh horses left to run. There are only a small pool of three year olds and a number of backward two year olds. I don’t have a huge supply for Pat and I imagine he may find it difficult.

“I think Dundalk could prove to be a key factor in the championship. I don’t have too many for those meetings and despite Pat’s excellent riding at Dundalk the pendulum could swing in Colin Keane’s favour there.

“They are two world-class riders. We are lucky to have the two of them in this country. I have the height of regard for Colin Keane. He is an excellent young rider. It will be very close,” said Weld on Tuesday.

Smullen had faced the possibility of a dash to Dundalk’s Friday night fixture but Weld has indicated the Moyglare Stud-owned Chiara Luna will skip Newmarket’s Oh So Sharp Stakes and wait instead for the Group Three Killavullan Stakes at Leopardstown later this month.

“Making Light won the Killavullan last year and Chiara Luna is likely to go for that race at Leopardstown,” he said.

However it does look like Smullen will miss out on Saturday week’s Fairyhouse fixture in order to team up with Eziyra in the Group One Champion Filly & Mare Stakes on Champions Day at Ascot.

“Hopefully Eziyra goes to Ascot. It’s the last big day of the European season and it’s been profitable for Pat and myself in the past,” said Weld who added that another Aga Khan-owned filly, Shamreen, has finished her racing career.

Shamreen started favourite for the Prix de l’Opera at Chantilly on Arc day but was well beaten on her final start.

“She did us proud winning back-to-back renewals of the Blandford Stakes and landing the Royal Whip as well,” said Weld who also added that plans have yet to be decided for his Grade One-winning mare, Zhukova.

She finished last in Sunday night’s Flower Bowl in Belmont and the trainer said: “They only had a sprinkle of rain in New York, it was firm ground and a mile and a quarter is not ideal for her. She’s come out of it well and looks magnificent but no decision has been taken on what she does next.”

Ger Lyons has made 21 entries to Weld’s 16 for this weekend’s flat action which includes the Listed Navigation Stakes at Cork on Saturday.

The Lyons stalwart Brendan Brackan could attempt to make it three-in-a-row in the mile contest for which Weld has left in Titus.

Weld’s sole Gowran starter, Solo Saxophone, would normally look to have enough in his locker to land a back-end maiden such as the one he lines up for at Gowran but Smullen is set to bump into Keane on the regally bred 92-rated World War.

The ex-Juddmonte runner Inscribe has joint top-weight for the mile handicap but there was encouragement in his first appearance in the David Spratt colours when a running on fifth to Goldrush at Navan.

Gavin Cromwell runs three in the mile and six handicap including Highland Reel who recorded a cross-code double at the Listowel festival. His stable companion Prospectus is also adept over flights and will relish this stamina test.