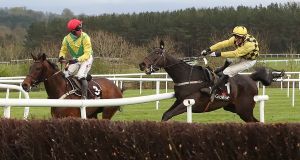 Paul Townend was hit with a 21-day ban for dangerous riding after one of the most bizarre incidents seen in years on an Irish racecourse during day one of the Punchestown festival on Tuesday.

The former champion jockey looked set for victory on Al Boum Photo in the Grade One Growise Champion Novice Chase until the partnership approached the final fence.

But the festival crowd was left stunned when Townend stopped riding, looked around and manoeuvred Al Boum Photo violently right in an apparent attempt to bypass the obstacle.

However, in doing so they carried out the English raider Finian’s Oscar who was in second. Al Boum Photo then crashed through the wing of the fence and dislodged Townend.

It left The Storyteller to lead home a Gordon Elliott 1-2-3 in a result that could prove decisive in his epic struggle with Mullins for the trainers’ championship which ends on Saturday.

Speculation as to why Townend made such a sensational manoeuvre ran riot afterwards, but a stewards official said after the inquiry that the rider wouldn’t be making any comment. Mullins didn’t have a runner in the final race and apparently had left the racecourse.

The champion trainer’s assistant, David Casey, did say, however, it looked to him like Townend had been trying to bypass the fence, although there didn’t appear to be any obstacle in his way. He also said Al Boum Photo appeared to be fine afterwards.

If the wake of the episode left an unsatisfactory vacuum in terms of information, the hard fact remained that Townend got a 21-day ban for dangerous riding, the most serious riding offence of all. He was also ordered to forfeit his riding fee.

Has someone shouted to Paul Townend from the outside of the track? @mickfitzg: "He's just had an absolute moment." pic.twitter.com/qbsEBxwxmK

Townend is a hugely experienced jockey, number two to Mullins for almost a decade, and has regularly filled in as first choice when Ruby Walsh has been injured, including much of this season.

He is due to ride four horses for Mullins on Wednesday, including Killultagh Vic in the featured Coral Punchestown Gold Cup.

Quite what his state of mind will be for such a high-profile assignment, on the back of a incident that had many veteran racegoers struggling for any sort of comparison, is anyone’s guess.

The Storyteller’s jockey Davy Russell could hardly believe his luck and said: “I had a quick look up [on the run to the last] and saw nothing. I thought the best I could get was third.”

Ultimately The Storyteller led home his stable companions Monbeg Notorious and Jury Duty for a 1-2-3 that emulated Elliott’s similar clean sweep in the previous Goffs Land Rover Bumper, won by Commander Of Fleet.

It leaves Elliott €405,839 clear of his rival in the race to be champion trainer, and he has been cut to 4-6 to go one better than last year.

Elliott watched the dramatic race at the final fence and said: “I don’t know what happened with Paul Townend, it all happened that quick. When I saw Paul go I wasn’t sure if it was being bypassed.”

As for the trainers’ title, he added: “It will be ding-dong this week whatever happens. If it’s like this for the week it’ll be interesting!”

If such an outcome suggests fate might be on Elliott’s side, then it hadn’t looked like that earlier in the day when Mullins won three races in a row.

The task of overhauling the €521,000 gap to his great rival this week got off to the perfect start with Grade One victories for Un De Sceaux and the 25-1 Draconien. Rachael Blackmore also won the handicap hurdle on True Self.

It was Mullins’s son, Patrick, who enjoyed a spectacular first ride on the flamboyant Un De Sceaux who made all to win the Boylesports Champion Chase at 9-2.

Patrick Mullins said: “I’ve been dreaming about riding that horse. When I was I told I was, I was like Charlie when he got the golden ticket off Willie Wonka!

“I schooled him yesterday and even schooling him was some buzz. It took him a while to warm up into the race. He didn’t jump or travel like he can but I think that was just the good ground. Once he’d warmed up I just let him at it. He runs horses into the ground.”

With Douvan running second, the net result of the first feature event of the week was a €205,500 swing to Mullins in one race, and afterwards the gap had reduced to €226,714.

And even though Patrick Mullins doubled up in the last on board Pat Fahy’s Kalum River, the overwhelming memory of the day will be Townend’s remarkable performance aboard Al Boum Photo. As omens for the trainers’ championship it felt very ominous for Mullins.