De Bromhead eager to muscle in on Mullins/Elliott show 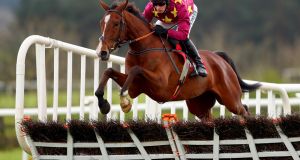 Both Willie Mullins and Gordon Elliott are represented in all three Grade One races on the first day of Punchestown 2018. So too is Henry De Bromhead. In the week that’s in it that seems worth pointing out.

Not by De Bromhead himself of course. That’s not the Tramore-based trainer’s style at all.

Such overwhelming focus on the Mullins – Elliott championship battle might look to reduce everyone else to ‘Third-Wheel’ status but he dismisses that as something he can do nothing about, even if he wanted to.

It’s not like De Bromhead isn’t used to operating in the looming shadow of racing’s twin big beasts every day of the racing year. In Britpop terms he’s like a plucky Pulp successfully charting a course through a fever of all-things Blur versus Oasis, doing his own thing, to the beat of his own drum.

Mullins and Elliott dominated Cheltenham with 15 of the 17 Irish-trained winners between them. But De Bromhead hitting the mark with Balko Des Flos in the Ryanair Chase was just the latest proof of his ability to consistently strike at the very highest level.

It’s why there’s actually no one better placed to appreciate the scale of what Mullins and Elliott are doing.

“What the two lads are doing is incredible. Gordon has saddled over 200 winners this season. Willie looks like doing it too. They’re one and two in Ireland and top 10 in Britain as well. I’ve great admiration for them both. They’re two brilliant trainers, raising the bar for all of us, all the time.

The €275,000 feature sums up much of Irish racing’s top-flight reality, with Mullins and Elliott saddling four of the 10 runners each

“I just feel if I focus on my own stuff I’m better off. We’re very happy tipping away and it’s been a good year so far. Now we just want to finish it on a high this week,” De Bromhead says.

Day One will be crucial to such ambitions. Monalee looks sure to start favourite for the Growise Champion Novice Chase. Paloma Blue is right in the mix for the Herald Champion Novice Hurdle while both Special Tiara and Ordinary World line up for the Boylesports Champion Chase.

The €275,000 feature sums up much of Irish racing’s top-flight reality, with Mullins and Elliott saddling four of the 10 runners each. Such is the power of their duopoly that the scale of De Bromhead’s achievement in remaining competitive against them can seem even more impressive.

His former two-mile title-holder, Sizing Europe, won the Champion Chase twice in 2012 and 2015 and in between famously chased home Sprinter Sacre.

De Bromhead’s latest two-mile champion, Special Tiara, faces a major task to try and emulate his former stable companion, not to mention try and win in Ireland for the first time in almost six years.

But what he and many of his stable companions will appreciate this week is a change from winter gluepot conditions.

“This will be far more their kind of ground. For instance I went to Cheltenham thinking Paloma Blue had a good chance of hitting the frame but afraid the ground there had taken away his chance of winning,” he says.

Sure enough Paloma Blue ran an admirable fourth in the Supreme while giving every impression there is more to come from him.

Monalee was more at ease on Cheltenham’s soft ground but still wound up finding Presenting Percy too good in the RSA. In his absence even the combined power of Mullins and Elliott may not stop him securing a second Grade One of the season.

“His run in the RSA was good but I was a little disappointed on the day. We went there thinking we could win it. But the winner was very good. At this time of year you can get funny results but our lad seems in great form and we’re happy to take our chance,” De Bromhead adds.

Also among his half-dozen strong team on Day One of the festival is the bumper contender Malinas Jack, an expensive purchase formerly trained in Britain by John Mackie.

Moving to Ireland is no one’s idea of an easier racing option these days. However Malinas Jack has a new trainer used to coming out on top. And doing so despite unprecedented levels of competition.