Gleeson has memorable Punchestown success with Just Wait And See 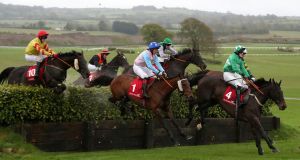 Just Wait And See ridden by Billy Gleeson on the way to winning the Kildare Hunt Club Fr Seán Breen Memorial Chase For The Ladies Perpetual Cup during day one of the Punchestown Festival. Photograph: PA

Whether either Willie Mullins or Gordon Elliott will get a bigger kick out of winning the trainers championship than John Gleeson did for Just Wait And See’s triumph over the Punchestown banks on Tuesday must be debatable.

Gleeson watched his son Billy guide the 16-1 shot to a dramatic head defeat of JP McManus’s 7-4 favourite Blue Templar and proclaimed it to be “the biggest buzz I’ve ever had in my life.”

The family success was a hark back to the jump game’s traditional roots as the Co Limerick trainer admitted: “I only have a handful of horses to keep an interest in the game. I said to him to ride him up there and he’d jump away grand.”

Gleeson Jnr has worked for Willie Mullins for two years but rode his first racecourse winner just last month. This time he got the better of no less than Derek O’Connor on the run-in of the Kildare Hunt Perpetual Cup.

“We’ve had the horse since he was four and he’s pulled up more times than he has placed. He’s a real fun horse, a very clever jumper. God knows how many fences he’s jumped in his life,” joked the rider.

The nine-times champion amateur Patrick Mullins teamed up with Pat Fahy to land the bumper on Kalum River who got the better of Barrington Court in a good finish.

“That was unbelievable. He showed us an awful lot after being broken. The heavy winter and the heavy gallops were so hard on him and he kind of went off I’d say,” Fahy said afterwards.

“I thought if he’d been fourth I’d be extremely happy. Patrick said he couldn’t even pull him up. It’s nice to get an odd surprise!” he added.

Kalum River was the third 16-1 winner of the day on a card which didn’t provide a single winning favourite.