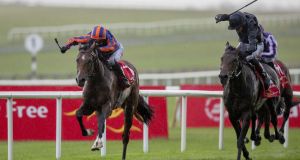 The champion stayer Stradivarius has a historic fourth Al Shaqab Goodwood Cup success in his sights on Tuesday but also perhaps the toughest task of his stellar career.

Aidan O’Brien’s decision to send the Irish Derby hero Santiago to the opening day highlight of the Goodwood festival serves up a potential inter-generational classic.

It isn’t unfamiliar territory for the Stradivarius camp, who in 2017 pitched their then three-year-old star against the reigning Ascot Gold Cup champion Big Orange.

The weight for age concession proved too much for the older horse and the result kicked off a new reign at the top of the stayers’ tree.

Stradivarius confirmed his status as one of the modern greats with a visually stunning Gold Cup hat-trick at Ascot last month.

He faces a very different task now however against a rising three-year-old in Santiago who not only can already boast a Classic in this unique season but gets more than a stone from his older rival.

“15lbs is a lot of weight to be giving to a very talented three-year-old so this is probably one of the greatest challenges of his career,” Stradivarius’s trainer John Gosden has conceded.

Santiago tackles two miles for the first time but proved his stamina credentials prior to the Curragh with a Queen’s Vase success at Royal Ascot, just as Stradivarius did three years ago.

Ahead of a week that includes both the Sussex Stakes, and the return of racegoers in a trial fixture at the weekend, Tuesday’s feature contains a suitably exploratory tone to the start of Goodwood.

The suspicion that Stradivarius’s laid-back nature has hidden more in reserve may get tested to the max by the task of conceding over a stone to a rising star such as Santiago.

The latter has already been identified by O’Brien as an heir-apparent to former champion Ballyodyle stayers such as Order Of St George and the peerless Yeats.

Beating another true top-notcher would be the ultimate confirmation of that by the Irish star.

Santiago’s 8.8 means Ryan Moore will be near his minimum weight and earlier the English rider also teams up with another Royal Ascot winner when Battleground contests the Group Two Vintage Stakes.

The son of Moore’s Arc heroine Found was spoken of in ‘could be anything’ terms by O’Brien after landing the Chesham on soft ground.

The champion trainer last won the seven-furlong race with War Decree in 2016 and has been impressed with Battleground to date.

“He’s a big powerful horse with a lovely mind. He’s very uncomplicated and mentally very easy. He hasn’t shown any issues yet, either mentally or physically,” he said.

“This will be another step in his life. Goodwood is obviously an unusual track so hopefully he’ll cope with it. And if he doesn’t hopefully he’ll learn from it,” O’Brien added.

Last year’s Chesham winner, Pinatubo, successfully doubled up in the Vintage on his next start.

Leinster look ready to step things up and burn off Saracens challenge 06:00
Misfiring Ulster facing a torrid time in Toulouse 06:00
Etneya win at Gowran would prove a fitting tribute to Smullen 06:00
O’Sheas and Breaffy looking to take final step to a first Mayo senior title 06:00
Paul Galvin’s Wexford departure takes a little of the shine off things 06:00
Here is your handy guide to sport on television this week