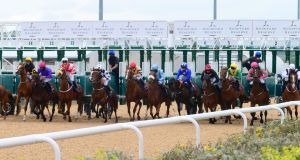 Runners and riders in the Ireland Thanks You Handicap at Dundalk Racecourse last weekend. Photograph: PA

Horse Racing Ireland has described as “devastating” the financial impact of the coronavirus pandemic on the racing and bloodstock sectors.

With no racing taking place between March 24th and June 8th due to Covid-19, and the sport taking place behind closed doors, HRI’s financial report for the first half of the year has seen an unprecedented slide in some figures.

Not surprisingly attendances levels for the first six months of 2020 have tumbled by almost 80 per cent.

On-course bookmakers have seen their turnover collapse by nearly 74 per cent in that timeframe having not been able to operate since March.

The bloodstock sector has statistically been affected even more with public sales down by a massive 87.3 per cent on the same period in 2019.

Many sales have been deferred or moved out of Ireland. Last week the prestigious Tattersalls Derby Sale was cancelled just five days before it was scheduled to begin, a decision driven by travel restrictions, and the 14 day self-isolation rule in particular, on overseas buyers.

With no attendances the survival of some of Ireland’s 26 racecourses has been called into question, something not helped by racehorse owners not being allowed to go back racing until August 10th as part of the government’s delay to lifting some lockdown restrictions.

In such a context HRI figures released on Friday that show a drop of just 1.6 per cent in the number of horses in training was praised as an example of the industry’s resilience in unprecedented circumstances.

In fact the number of horses in training at the end of June was up 6.8 per cent year on year which reflected the resumption of both National Hunt racing as well as the flat. However the number of active owners fell by almost 14 per cent in the first half of the year.

A total of 87 fixtures were lost in Ireland between March and June resulting in a hugely revamped fixture programme for the rest of the year.

HRI’s chief executive Brian Kavanagh said on Friday: “2020 has been a devastating year for the country and like many other sectors the horse racing and breeding industry has suffered greatly having effectively come to a standstill on March 24th. Against that background any comparison in previous years is futile.”

He added: “The absence of attendances is having a devastating impact on racecourses and the businesses that depend on them such as on-course bookmakers, Tote, caterers and so on.

“HRI and the racecourses are working to develop methods by which attendance can return once deemed appropriate by government. This is challenging and the contribution by the racecourses in continuing to race behind closed doors since June 8th is commendable.

“While traditionally the quieter part of the year, bloodstock sales figures for the first half of 2020 were decimated.

“The sales companies have shown flexibility with regard to their dates and HRI is working with them and government to ensure that sales can safely resume in Ireland in August.

“The equivalent sales of those scheduled to be held between now and the end of the year generated €150 million in turnover for Irish breeders in 2019, much of it to overseas buyers.”

Kavanagh acknowledged the contribution of owners, both domestic and international, in keeping horses in training and protecting employment and economic activity in rural Ireland.

Attendances down 79.1 per cent

Bloodstock sales down 87.3 per cent

Current Horses-in-Training up 6.8 per cent

Active Owners down 13.9 per cent

Field sizes up 3.4 per cent

On-Course Betting down 73.9 per cent

Roscommon to fulfil Cavan fixture despite Covid-19 case 09:03
Tiger Roll to return on the flat at Navan on Thursday 08:22
Exeter’s Rob Baxter: Covid-19 poses threat to rugby’s viability 08:18
Waterford pull out of Antrim clash due to Covid-19 concerns 09:29
Golf courses to close under Level 5; Andy Farrell names team for Italy clash 07:52
Here is your handy guide to sport on television this week