Overwhelming Ballydoyle team could have just a single Futurity opponent 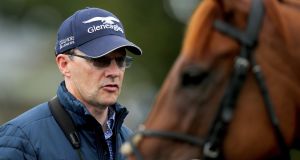 Aidan O’Brien’s prospects of a record-equalling 10th triumph in Saturday’s Vertem Futurity look overwhelming as, remarkably, just a single opponent is prepared to take him on in the final Group One of the British season.

The Andrew Balding-trained Kameko is the only non-O’Brien trained hope among a dozen entries left in the Doncaster feature after Monday’s forfeit stage.

It’s a rare exhibition of dominance that leaves the Irish trainer on the verge of equalling Henry Cecil’s 10 victories in the mile contest.

O’Brien has indicated both Mogul and Innisfree are likely Futurity contenders. But he can also call on the National Stakes runner-up Armory as well as the Royal Lodge winner Royal Dornoch. The latter got the better of Kameko by a neck in that Newmarket contest.

Although the Balding team looks likely to be resoundingly outnumbered this weekend, the English trainer can call his experience of winning the Doncaster highlight in 2014 with Elm Park.

One firm’s immediate ante-post reaction was to make Mogul an odds-on favourite but it is the 6-1 shot Kameko that could wind up being regarded as the most important potential participant.

More than the Doncaster executive will be keeping their fingers crossed he gets to the starting gate in order to prevent the near farcical situation of a major Group One prize being exclusively contested by horses from a single stable.

Qater Racing’s manager David Redvers later stated: “It’s a horse race. You have to take them on and it doesn’t matter who trains them. It’s our horse running against a load of other horses at the end of the day.”

But there was criticism of other major cross-channel based operations for not entering horses to take on O’Brien’s Ballydoyle team in such a valuable and prestigious prize.

Doncaster’s clerk of the course admitted to being lost for an explanation in relation to the O’Brien monopoly and stressed currently good to soft ground conditions couldn’t be blamed.

“Respect to Aidan. We’re always grateful for Coolmore’s support and on this occasion we’d be lost without them,” said Roderick Duncan.

After a turbulent 2019 the revamped Curragh stages its final fixture of the year on Tuesday with free admission to what’s often termed an ‘industry’ programme.

Donnacha O’Brien holds a four-winner lead over his jockeys championship rival Colin Keane (103-99) although Keane can reach his own century on the Juddmonte newcomer Lough Cutra in the opening juvenile maiden.

O’Brien should fancy his chances later on the card with Patrick Sarsfield in a three-year-old maiden.

Stephen Kenny vowing to do things his own way, an Ulster final like no other 08:14
Ireland boss Stephen Kenny: ‘I’ll do things my own way. Put it that way’ 06:00
Mickey Graham calls for some clarity from GAA on championship plans 08:24
Whole new ball game: Hats, scarves, facemasks - An Ulster final like no other 06:00
Damian Browne: To the ends of the Earth in search of the ‘savage warrior spirit’ 06:00
Here is your handy guide to sport on television this week