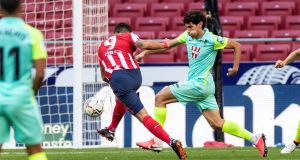 Debutant Luis Suarez wasted no time in making his mark at Atletico Madrid as Bundesliga champions Bayern Munich suffered a day to forget.

Suarez came off the bench with 20 minutes remaining, and Atletico leading 3-0, to announce himself in style three days after his arrival from Barcelona with two goals in a 6-1 rout of Granada.

Diego Costa scored the only goal of the first half after nine minutes, with Saul Niguez’s seeing his 16th-minute penalty saved by Rui Silva for the hosts.

Angel Correa and Joao Felix netted before Suarez’s introduction, and he made an immediate impact by laying on for Marcos Llorente to add a fourth.

Suarez scored a fine header to open his account in the 85th minute and, while Jorge Molina grabbed a late consolation for Granada, the Uruguay striker slid home his second in stoppage time.

Barcelona also enjoyed an impressive victory on Sunday with Lionel Messi scoring a penalty and Ansu Fati notching a quickfire brace as Ronald Koeman’s team opened their LaLiga campaign by thumping Villarreal 4-0 at the Nou Camp.

Messi — making his first competitive appearance since informing Barca in August that he wanted to leave, then subsequently deciding to remain for this season — converted a penalty in the 35th minute to put the hosts 3-0 up. The spot-kick was awarded following a Mario Gaspar foul on teenager Fati, whose superb start to the contest had already seen him score two goals in quick succession.

The 17-year-old Spain international fired in the opener in the 15th minute having received the ball from Jordi Alba’s cut-back. Four minutes later Philippe Coutinho, back from his loan spell at Bayern Munich, drove forward from his own half and fed Fati, who slotted past Sergio Asenjo. After the subsequent penalty, things got better still for new Barca boss Koeman just before the interval as a Messi delivery was diverted by Villarreal’s Pau Torres into his own net.

Elsewhere in LaLiga, Ivan Rakitic marked his Sevilla return by wrapping up a 3-1 victory at Cadiz.

If it proved a good day in Spain for the Uruguay international, it was an awful one in Germany for European champions Bayern as they slipped to a first defeat in all competitions in 33 attempts dating back to December at Hoffenheim.

Ermin Bicakcic headed the home side into a 16th-minute lead which was doubled within eight minutes by Munas Dabour.

Joshua Kimmich reduced the deficit from distance with 36 minutes gone as his side attempted to preserve an unbeaten Bundesliga run which stretched to 21 games before kick-off.

However, Andrej Kramaric dashed any hopes of a comeback when he restored Hoffenheim’s two-goal advantage with 13 minutes remaining and then cemented a 4-1 win with a stoppage-time penalty after goalkeeper Manuel Neuer had fouled Ihlas Bebou.

In Ligue 1, Wissam Ben Yedder’s double laid the foundation for Monaco to beat Strasbourg 3-2 despite playing the last 23 minutes with only nine men.

Ben Yedder’s brace either side of Ruben Aguilar’s strike and Mehdi Chahiri’s reply had the home side coasting, but they had to hang following the second-half dismissals of Aurelien Tchouameni and Axel Disasi. Ludovic Ajorque’s penalty set up a tense conclusion.

In Serie A, Napoli routed Genoa in a comprehensive 6-0 triumph, with Hirving Lozano grabbing a brace. Piotr Zielinski, Dries Mertens, Elif Elmas and Matteo Politano were the other goalscorers at Stadio San Paolo.

1 Level 5 golf shutdown: Ireland one of few countries to close courses
2 Dan Martin toasting another stage win at the Vuelta
3 Shock at golf clubs as sport faces shutdown in Level 5
4 Disappointment and frustration par for the courses as golf goes into lockdown
5 Kerry v Donegal brought forward to facilitate marathon journey
Real news has value SUBSCRIBE
Crossword Get access to over 6,000 interactive crosswords