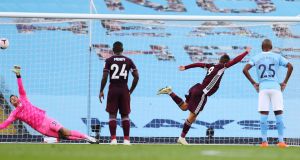 Manchester City goalkeeper Ederson is beaten as Jamie Vardy fires home from the penalty spot to make it 1-1 at the Etihad Stadium. Photograph: Cath Ivill/EPA

Brendan Rodgers has been waiting a long time for a first win against a Pep Guardiola team, and the irony here was that it looked for all the world as if winning was the last thing on his or Leicester City’s mind.

In the end, with James Maddison’s emphatic strike and Youri Tielemans’ penalty completing a stunning victory, Rodgers had the sort of statement result Leicester last managed here in their title winning season of 2015-16, yet one would not have imagined such a thing possible after turning up at the Etihad with an attitude so defensive it would have made Jose Mourinho blush.

Perhaps Rodgers knew all along that Jamie Vardy would be able to turn the match around in a devastating 20 minute period either side of half time. Vardy was barely in the game except to win it, he was not quite able to complete the full 90 minutes yet he has now completed two hat-tricks against Guardiola’s City and a total of nine goals in all.

This was not the message Guardiola would have been hoping to send out to Liverpool from the first home game of the season. The only conclusion it was possible to draw, bar that Vardy remains a remarkable competitor, is that despite all the spending the Manchester City defence is still not good enough.

Not that the home attackers were particular convincing either against Leicester’s massed defence.

The visitors turned up with five at the back and four strung across the field no more than a few yards in front of them. Even Vardy, their one-man attacking outlet, stationed himself midway between his own penalty area and the centre circle for most of the first half.

Goodness knows how defensively the visitors would have approached the game had Sergio Aguero or Gabriel Jesus been fit to play, for the low block did not let up even when Manchester City took a fourth-minute lead.

There was nothing any formation could have done about Riyad Mahrez latching on to a loose ball from a corner with unexpected ferocity, yet having gone behind Leicester continued to show little inclination to cross the halfway line.

Had a crowd been present there might well have been boos and jeers, for the contest looked more like an attack versus defence exercise on the training ground.

The home side had almost all the possession, their holding midfielders Fernandinho and Rodri had little do do but pick up stray balls on the half way line and set new attacks in motion, and even when Leicester did manage to move forward they were usually starting from positions too deep to cause any problems.

It was as if no one had noticed that Guardiola’s team had been beaten on several occasions last season, quite often by teams exploiting the amount of space behind their high defensive line.

Leicester did not look interested in doing any of that, even when notionally chasing the game they gave the impression they were more concerned with keeping their shape rather than running or chasing.

Yet before the first half was out they were back level, and because the home side had actually managed to do very little with their overwhelming share of possession and unlimited attacking opportunities it was hard to say the equaliser was undeserved.

Obviously finishers of the quality of Aguero and Jesus were missed – Raheem Sterling has a fair amount of experience as a stand-in central striker but he does not always make the instinctive runs in the box to make the most of Kevin de Bruyne’s crosses – but what was noticeable in such a one-dimensional game was the small number of opportunities Manchester City were able to create.

After scoring from a set-piece their best two chances to increase their lead also arose from dead ball situations – a Fernandinho header from a free kick and a Rodri header that was disallowed for offside.

Given that level of profligacy it was impossible not to enjoy the way Vardy extracted the absolute maximum from extremely limited involvement. He only touched the ball eight times in the first half yet turned up in exactly the right place to embarrass Kyle Walker and win a penalty, while the goal from open play that put Leicester in front early in the second half was straight from the 2016 playbook.

This time it was Timothy Castagne rather than Mahrez supplying the driving run and near post cross but the almost magical touch that lifted the ball over Ederson was pure, vintage Vardy.

The striker was barely into double figures for touches of the ball when he won a second penalty and completed his hat-trick, cleverly finding a position where Eric Garcia had committed a contact foul before he properly knew what was happening. His work done, Vardy slowed up with a groin problem that eventually saw him withdrawn.

It is funny how the Leicester striker seems to reserve his very best efforts for the best opponents. Liverpool have suffered from that in the past and now it seems to be Manchester City’s turn again, though Guardiola will find it anything but humorous.