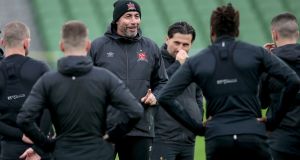 Dundalk manager Filippo Giovagnoli talks to his squad during a training session at the Aviva Stadium ahead of Thursday night’s Europa League playoff against KI from the Faroe Islands. Photograph: Bryan Keane/Inpho

Recently installed manager Filippo Giovagnoli is far from keen on the notion but Dundalk find themselves in the highly unusual and, for an Irish side, slightly uncomfortable position of going into Thursday evening’s Europa League game against KI as favourites.

Airtricity League clubs have only qualified twice for the group stages of the competition but more commonly provide a bit of human interest around this time of year for international media outlets looking to focus on some collection of relative unknowns aiming to pull off a big payday. The BBC have been among those from abroad taking the bait this week but it is the potential for a Faroese financial fairytale they have been focused on.

For the Italian, his players and, of course, their employers, there is an urgency about ensuring that team from Klaksvik are denied their windfall. European prize money is a large part of what the club is about just now and there is an awful lot of it at stake.

“When they hired me, they were talking only about that, only about September 17,” says Giovagnoli, referencing the date of the first European game he was to take charge of. “This was all they were asking . . . September 17, September 17. That’s it. I arrived on August 24 but they were reminding me always: September 17. Now we are October 1, so we did something.”

They have certainly done a little more than their opponents who because of the Covid-19 related walkover against Slovan Bratislava that got them through the first round of the Champions League have only actually had to win one game to get this far.

Still, there is no denying that last week’s 6-1 defeat of Dinamo Tbilisi was impressive. And it demonstrated beyond dispute that they arrive with a game plan.

Four of the Faroese side’s goals came from set pieces, three of them scored in the space of 13 second-half minutes by Pall Kletskaro and all off the back of, Giovagnoli observes, just 29 per cent possession in the game.

Kletskaro and Norwegian striker Ole Erik Midtskogen form a highly successful strikeforce back at league level and the team, which includes six internationals, scored 19 goals in the three games before they turned their attention to Europe. Dundalk seem set to have a lot of the ball but their visitors will move it quickly forward when they get it and there is clearly the potential for the home side to be caught out if they are not very careful.

“They are a team that are really dangerous,” Giovagnoli says. “They don’t need to have the control of the game; they can be dangerous at any moment the way they play. We will prepare for that and tomorrow, I’m pretty sure we are going to perform at a high level.”

The occasion seems made for his captain Chris Shields but the midfielder, so adept at nipping potentially difficult situations in the bud, is suspended. He looks likely to be replaced by Pat McEleney with Seán Gannon facing a fitness test on the ankle injury he aggravated early on against Sheriff Tiraspol.

The expectation might be that Giovagnoli’s reward for overcoming the challenge KI pose might be a new contract but, having gotten the team this far, the 49-year-old sounds confident that that is already more or less in the bag.

“It is a mission for me,” he says of his stint at the club, still just five weeks old. “I’m away 40 days from my family, without seeing my son and wife. The only thing I do is train, prepare, go to bed and breakfast, eat and sleep and go back to the pitch. It’s the only thing I do. It’s a mission when you’re away from your family and you see only this. It’s going to be a mission until the end of the season and I hope to extend the mission.”

His journey to this point is, he says, unbelievable, but asked out straight if he thinks he will be around year, he simply says: “yes”.

With just one defeat in five games, his impact has certainly been impressive and he has, he says, only been discovering along the way exactly what he is capable of.

Not nearly as much fun, one suspects, or as unbelievable as managing in the Europa League group stages would be, although he is well aware how things might change if Thursday’s game does not go to plan, especially given the unexpected expectations.

“Football is like that: you can be a hero one day, and the day after, if you don’t perform, if you lose a game, you become stupid. It is what it is, but now the focus is on this game.”