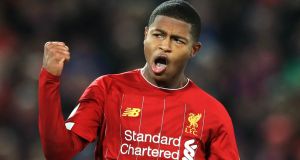 Liverpool manager Jürgen Klopp admits it would have been selfish of him to keep Rhian Brewster knowing the 20-year-old would barely get any game-time.

Brewster, who scored 11 goals in 22 appearances on loan at Swansea in the second half of last season, became Sheffield United’s record signing after completing a €26 million move on Friday.

However, he is so highly-rated at Anfield despite not yet making a Premier League appearance that sporting director Michael Edwards has negotiated a three-year buy-back option in addition to a 15 per cent sell-on fee.

But no matter how good Liverpool think Brewster is, Klopp said it would not be fair to hold onto him on the chance he would develop into a genuine first-team player, especially after he fell further down the pecking order following the arrival of Diogo Jota for €47.5 million.

“If I am selfish that never helps really to be honest,” Klopp said.“I need a player in the right place and at the right moment so that means he is ready to fight.

“Everybody needs to know, all the young boys need to know, that we don’t keep them here at all costs – just so we have a solution for one or two games a year – that is not how we work.”

William Saliba could leave Arsenal on loan before Monday’s international transfer deadline, with Mikel Arteta admitting the next few days are a “crucial moment” in shaping his squad for the rest of this season.

Arsenal face a race against time to shuffle their pack, with their move for the Lyon playmaker Houssem Aouar having gained little traction since an initial €35 million bid was rejected last weekend. They are struggling to move players out to finance a higher offer and other options remain on the table, with the Chelsea midfielder Jorginho understood to remain among their backup targets.

Arsenal would try to sign Jorginho on loan if deals for Aouar and Atletico Madrid’s Thomas Partey, were not completed but that would depend on Chelsea making a surprise move of their own for a replacement.

Arteta made no attempt to downplay the importance of the next 72 hours and admitted things would need to start moving quickly. “It is a crucial moment because in the end it defines the people, the players, the balance and the quality that you’re going to have for the rest of the season,” he said.

“We need to make some decisions in the next three days. I think everything has been delayed so much, not just us but probably every team because of the context we’re in at the moment. We will try to make the best possible decisions and at the end, whatever we have, we go for it fully convinced and prepared to have a good season.”

Rennes have been strongly linked with a move for the 19-year-old Saliba, who has struggled for game time since returning from an injury-plagued loan season at Saint-Etienne during the summer.

Arteta explained Arsenal were examining ways to compensate for his disrupted 2019-20 campaign and it appears likely Saliba, a €30 million signing 15 months ago, will spend this campaign in his native France. “[Due to] the difficult year that the player had the plan that we had for him, for the transition year, we could not achieve,” he said. – PA, Guardian