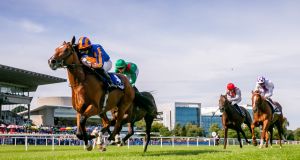 Aidan O’Brien has said his Derby plans in this unprecedented classic campaign are currently “up in the air” but has ruled out any horse running in both the Curragh and Epsom Derbies.

The coronavirus emergency has provoked the novel situation of this Saturday’s Dubai Duty Free Irish Derby taking place first, a week before Epsom which has had to be pushed back by a month.

With little prospect of an overseas-based runner travelling to the Curragh, it means Ireland’s premier classic is likely to be a domestic only affair and O’Brien appears to hold a very powerful hand as he pursues a 14th success in the race.

The top of most ante-post lists is dominated by Ballydoyle with the Irish 2,000 Guineas runner up Vatican City as low as 11-4 favourite to go one better in the Curragh Derby.

However, the regally-bred colt is also a general 16-1 shot in betting for Epsom where his Royal Ascot winning stable companion Russian Emperor is as low as 8-1.

The highly rated Mogul could finish only fourth on his reappearance in last week’s King Edward VII Stakes at Royal Ascot and also features in betting for both Derbies.

With an apparent dearth of potential Derby contenders elsewhere in Ireland the question of how O’Brien divides up his resources will have a crucial impact on the Curragh race in particular.

“It’s kind of up in the air but it is very important and we will support it well as we always do,” Ireland’s champion trainer said on Sunday.

“Tiger Moth (Leopardstown maiden winner), Arthur’s Kingdom (runner up in the King Edward) and Mythical (beaten in the Gallinule Stakes) are possibles.

“We will have to see about Mogul and how he is. He’s only back in the last week. It might come too quick because he got tired.

“There are other horses that ran in the (Irish) Guineas and is it going to come too soon for them. If they’re back in time they can go to the Curragh. But if they need another week they can go to Epsom. It’s very open at the moment,” he added.

The picture is likely to become more clear after Tuesday’s acceptance stage for the Curragh.

One potential contender is Joseph O’Brien’s unbeaten Crossfirehurricane who was impressive when winning the Gallinule Stakes just over a week ago.

However O’Brien, who saddled the 2018 Irish Derby winner Latrobe, and won it twice as a jockey on Australia and Camelot, suggested afterwards he may keep the American bred at a mile and a quarter for the Tattersalls Gold Cup.

A series of gallops at Ballydoyle on Tuesday morning may play a decisive role in any decision by O’Brien although he has ruled out any horse doubling up at both the Curragh and Epsom.

“Horses couldn’t do the two. I suppose the split would be that the more mile and a half horses could go to the Curragh. The horses that would be lucky to get a mile and a half would go to Epsom, or something like that. There is also the French Derby the day after Epsom,” O’Brien said on Sunday.

As a full brother to the Guineas winners Churchill and Marvellous, Vatican City could fall into the latter category although he ran on noticeably well in the Irish Guineas when best of the Ballydoyle team behind Siskin. Armory was slightly hampered in that race when fourth.

Monday sees the return of the National Hunt game in Ireland after three weeks of flat action since racing’s resumption.

Limerick hosts an eight-race card starting at 4.10 where decent ground could see Gavin Cromwell’s Bentham get off the mark over flights in the opener.

Gordon Elliott has made nine declarations for Limerick and Battle Of Wills in particular looks to hold leading claims in a conditions hurdle.

Elliott also runs four at Monday’s flat fixture in Roscommon although Bigbadandbeautiful can maintain the jumping theme in the concluding maiden.

The triple-bumper winning mare started odds-on for the Grade Two bumper at the Dublin Racing Festival but disappointed in fourth behind her stable companion Darling Daughter.

She looks to have enough class to be more than competitive dropping back to a mile and a quarter.