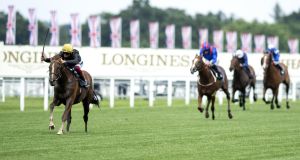 Stradivarius confounded fears soft ground might scupper his chances of a Gold Cup hat-trick with a spectacular romp around a behind closed doors Royal Ascot on Thursday.

Rather than being a problem, the rain-soaked going instead seemed to transform the popular little chestnut whose flamboyant 10-length success replaced a usual penchant for winning narrowly.

The John Gosden trained star joined Sagaro as a hat-trick hero in the historic stayers championship and is as low as 13-8 to match Aidan O’Brien’s ultimate Gold Cup champion, Yeats, by winning a fourth in 2021.

On Day Three of this unique Royal Ascot the performance even generated a hint of atmosphere on the deserted racecourse with Frankie Dettori performing his trademark flying dismount to scattered shouts and applause.

If ‘colty’ behaviour beforehand suggested a four-in-a-row might be not to the forefront of Stradivarius’s mind then the most visually spectacular victory of his career indicated otherwise.

Dettori tracked Nayef Road to outside the furlong pole and Stradivarius shot clear to win as he liked.

“He is quite a character. I must change my aftershave as he got quite coltish whilst I was saddling him. He is a quite a noisy character and he was having a shout and play out there. He does think life is a bit of fun and when you win races like this I suppose it is,” Gosden said.

The trainer nominated a different and more immediate potential four-in-a-row target in the Goodwood Cup next month.

As for a chance to emulate Yeats next year, he stressed that will be the prerogative of his owner-breeder, Bjorn Nielsen, although significantly he added: “The way he liked my aftershave I am not sure!”

The six-year-old is also as low as 20-1 for the Arc where he could meet his stable companion Enable.

It was an eighth Gold Cup for Dettori - three behind Lester Piggott’s record.

“You never ever are on the bridle in the Gold Cup a furlong out, because usually everybody labours by the three. So, it was an amazing feeling, and a fantastic performance.

“One day when I am sitting in my rocking chair, to say I rode the horse who won three Gold Cups in a row - that’s a big number. I am very proud of it.

“I have ridden some great horses, and he will go down as one the great stayers, definitely my best stayer,” said the Italian.

Earlier Aidan O’Brien had to settle for second places with Sir Dragonet (Wolferton Stakes) and Monarch Of Egypt who couldn’t repel Molatham in the Jersey Stakes.

However there was a significant win in the Chesham where the superbly bred Battleground, the first foal of Arc winner Found, earned classic quotes for next year.

O’Brien put him in the ‘could be anything’ bracket and although Found’s best form was at a mile and a half suggested her son could be a top miler.

“Found got a mile and a half but he is by War Front and that’s a big influence for speed. We’re hoping he could progress into a very good miler.

“Found was a magic mare. She was one of the very special ones and everyone remembers her. Obviously this is her first foal and everyone wants to do well. Battleground is an unbelievable specimen really,” he said of a colt who only made his debut last week.

“It was a big ask for our two-year-olds as most of them only run last week. We needed to get a run into him otherwise it was going to be difficult to get into the race as they would have been fourth or fifth preference.

“We were lucky in this race that it was not a full field and he finished fifth on his debut,” O’Brien added.

Jockey Jim Crowley started the week with a career haul of six Royal Ascot winners and after just three days has managed to double that tally.

On Thursday Molatham was briefly headed by Monarch Of Egypt in the Jersey but fought back well while Khaloosy, another for Crowley’s boss, Sheikh Hamdan, swept to victory in the Britannia Handicap.

Their two wins completed a hat-trick for trainer Roger Varian who also landed the Wolferton with the 8-1 shot Mountain Angel.

“This is right up there (as one of the best days) as this is the hardest place to get winners. So to get three in a day and four in a week is great,” Varian said.