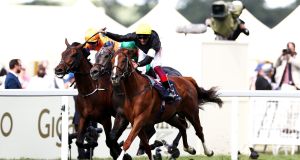 Stradivarius will try to confirm his status as the sport’s top stayer and enter the Ascot Gold Cup’s most exclusive company on Thursday.

Just two horses have won the stayers’ championship event more than twice. The French star Sagaro pulled off a hat-trick under Lester Piggott between 1975 and 1977. Aidan O’Brien’s Yeats trumped that with four-in-a-row between 2006 and 2009.

O’Brien has no runner this time with his big hope, Kew Gardens, ruled out. In his absence there has been an expectation that a Gold Cup hat-trick is all but inevitable for Stradivarius.

The bonny little chestnut is all but sure to start odds-on, although this could emerge as a different challenge compared to his win in 2018 and last year.

An unsettled forecast may not produce ground as soft as when Kew Gardens edged him out on British Champions Day last October. Stradivarius’s liking for quick going is renowned.

Less clear is what impact the unusual preparation he’s had in a season turned on its head by the coronavirus pandemic will have.

John Gosden’s star has had a run over a mile-and-a-half at Newmarket just 13 days ago, when third to Ghaiyyath and Anthony Van Dyck in the Coronation Cup.

That was a fine effort in a race run in record time. But whether it creates a bounce effect trying to back it up in the shortest interval between races of Stradivarius’s career is a great unknown factor.

Frankie Dettori wasn’t particularly hard on him at Newmarket. Nevertheless that race was run at a real tempo throughout. Maybe this outstandingly tough and classy individual will shrug it off. However, he’s a short price to take it on trust, as even Gosden has conceded.

“The 13-day gap is not ideal. You would much prefer a three-week gap but I didn’t want to be going to a Gold Cup over 2½ miles without a prep race and at least it was at home [Newmarket],” he said.

“Kew Gardens beat us over two miles on the inner track where it was soft, and I just hope we don’t get ground like that again. I’d be more worried about the ground than anything else,” Gosden added.

That put a seal on a campaign where Oisin Murphy’s mount rapidly progressed and showed a distinct liking for cut in the ground. He’s the sort of up-and-comer that might yet spoil the fairytale outcome.

Even his trainer Martyn Meade alluded to the bounce factor surrounding his big rival when saying of Technician: “It’s our first run of the year but the only real option was the Coronation Cup and I’m glad we didn’t run there as the last thing we wanted was for him to have a hard race.”

Aidan O’Brien has four runners on day three including both Monarch Of Egypt and King Of Athens in the Jersey Stakes.

A quick turnaround was no problem to Russian Emperor in Wednesday’s Hampton Court, but any cut in the ground would hardly favour either Ballydoyle representative.

It would be no problem whatsoever for Godolphin’s Final Song, who belied 100-1 odds with a fine fourth in the 1,000 Guineas.

Churchill won the Chesham Stakes as a maiden in 2016 and Battleground bids to do the same on Thursday. He ran with promise on his debut at Naas last week.